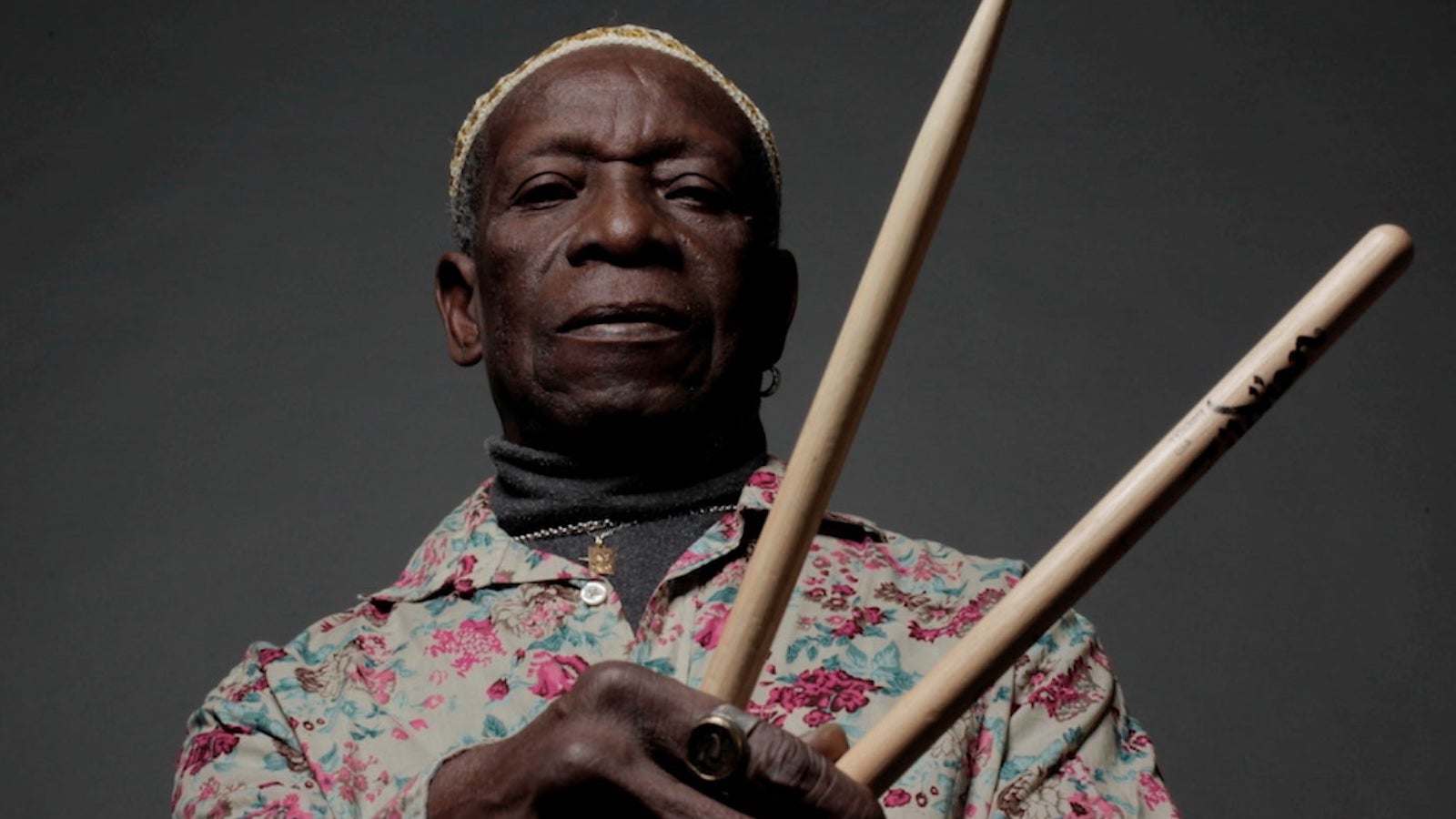 Legendary drummer Tony Allen died on 30 April 2020 aged 79.  He was furiously creative and prolific until the end. 1BTN pays tribute to the great man by shining a light on 5 recordings from the last five years that indicate the breadth of his collaborations.

This week we lost another giant of world music, or let’s just say of music full stop. Tony Allen was the guy that invented the afrobeat pulse, Fela Kuti’s musical director, the don of polyrhythmic kit drumming. Nearly every press release about Allen will tell you that Brian Eno reckoned he was “perhaps the greatest drummer who ever lived” – a quote that would be a lot more impressive if it came from a percussionist and not a knob twiddler right? Well, whatever, it’d be hard to over estimate his significance in the world of contemporary music. Allen was a master of his craft, and in his senior years so deeply relaxed into his style of playing (uniquely his but endlessly copied) that he could deliver fiendishly difficult grooves without breaking sweat and barely moving his arms – operating at about the level of exertion it takes to stroke a cat it seemed.

Allen had started out playing Highlife with Fela in Nigeria but soon developed his signature sound, taking inspiration from jazz drummers like Art Blakey, Elvin Jones and particularly Max Roach.

“Watching drummers playing in my country, I knew that something was wrong somewhere.”, he told Wire magazine in 2016.

“Why is it that they don’t use their hi-hats? It’s there, it’s always there, but its closed, they don’t use it – well, they used it, but that thing has a pedal, you know? I felt that this thing should be like riding a bicycle – you have good legs, you have pedals, you need to put your feet on both pedals to make you move. I started to discover my way of playing when I started to play the drums, but I didn’t want to play like others. I just wanted to make sure I used this instrument the way it was put in front of me. Meaning that it’s four limbs: you have to use your four limbs. Which was very rare for the other drummers to use their four limbs. Maximum was three.”

A promoter in Ghana coined the term Afrobeat for this ‘four limbs not three’ musical form that he’d created and Allen went on to make nearly 30 records with Fela, a long and sometimes difficult journey that has been told elsewhere. By 1979 Allen broke ranks with Africa 70 to do his own thing taking some other members with him and moved to London and later Paris. His releases, although brilliant, slowed to a trickle until he hooked up with Paris based Comet Music in the late 90s and from then on in releases and collaborations came thick and fast. In the last 15 years there were so many hook ups with other musicians across the musical spectrum that it was easy to wonder if he was just saying yes to everything! But, there’s so much great stuff in amongst it all. Sometimes Allen’s is the magic touch a record needs or perhaps it provides the inspiration for other musicians and producers to raise their game (Imagine Sébastien Tellier’s La Ritournelle without Allen’s drumming and with a plodding house beat – it wouldn’t be much cop!).

To prove my thesis lend an ear to these five deadly Tony Allen releases from the last five years. Then, if you aint got ‘em already, go out and buy ‘em … or, mid pandemic, more realistically, sit at home and buy ’em.

Nu Guinea
NG Theme from The Afrobeat Makers Vol. 3 (The Tony Allen Experiments)
(Planet Woo/Comet) 2015
Ok, I’m slightly cheating with my first selection! Eric Trosset of Paris based Comet Music began collaborating with Tony Allen in 1998, releasing Ariya, Black Voices and other LPs. Starting in 2012 Comet began a series of LPs whereupon various DJs, producers and ne’er-do-wells were let loose with Allen’s drum grooves with very mixed results (God knows what Allen thought of this). But they struck gold with their third installment. Fledgling Neapolitan (hard to use that adjective without thinking of ice cream) duo Nu Guinea proved to be adepts of neo-Italo-tribal-cosmic-disco and took Allen’s grooves to places Daniele Baldelli hadn’t even dreamt of. The whole album is fantastic but NG’s Theme is the one that does it for me. It’s the sort of stuff that the 1BTN balearic massive live and die for.

Tony Allen
Bad Roads (From The Source LP)
(Blue Note) 2017
It was only natural that Tony Allen, who had taken so much inspiration from American jazz drummers, especially of the be-bop/hard-bop era, would eventually find his way onto Blue Note. This was actually his second release for the label, hot on the heels of the A Tribute To Art Blakey And The Jazz Messengers EP, but consists of original compositions in collaboration with saxophonist Yann Jankielewicz and other France based players, some of whom played on the aforementioned record (Allen had been living in Paris for three decades). It’s certainly not a straight jazz album, and neither is it an afrobeat record, but colourfully straddles the two genres. Bad Roads is one of the highlights of the album, more at the afro end of things, built around Allen’s snare dominated groove, a big bassline and the offbeat skank of Cameroonian guitarist Indy Dibongue.

Oumou Sangaré
Yere Faga ft. Tony Allen from Mogoya
(No Format) 2017
Malian songstress Oumou Sangaré’s long awaited return to the recording studio in 2017 yielded one of the last decade’s most distinctive tracks. Set over a lolloping Allen groove Yere Faga is an appeal to anyone harbouring suicidal thoughts: value your life, consider the effect of your actions on your nearest and dearest. Ludovic Bruni, Vincent Taeger, Vincent Taurelle are the French musicians that provide musical accompaniment on this occasion and their production is bad-ass.

Tony Allen & Jeff Mills
On the Run from Tomorrow Comes the Harvest
(Decca) 2018
Following on from his 2015 collaborations with one techno legend, Moritz Von Oswald on the album Sounding Lines, picking up the mantle in his trio from departing rhythm technician Vladislav Delay, Allen hooked up in 2018 with Jeff Mills (Underground Resistance). Along with his bandmate from Psyco On Da Bus, keyboardist Jean Phi Dary they unreeled some of the most futuristic business ever laid down on wax. If it didn’t necessarily make sense on paper, their unpredictable and explosive crowd rousing shows proved otherwise. Tomorrow Comes the Harvest took Kraut kosmische business into previously uncharted afro realms. If you aint down with it but you liked Floating Points’ big band prog stuff then it’s time you acquainted yourself with this record.

Tony Allen & Hugh Masekela
Never (Lagos Never Gonna Be The Same) from Rejoice LP
(World Circuit) 2020
This is a 2020 release but the London sessions for what has ended up being Tony Allen’s last LP were actually recorded in 2010, and were left languishing in the vaults until recently. The pair had first met in the 1970s when Masekela made a couple of trips to Lagos to hang out with Fela and Allen. On the second occasion he found himself in the company of Gilberto Gil, Caetano Veloso, and Stevie Wonder but none of the ensuing all night jams found their way onto tape! This is the one and only recorded collaboration between the high priest of South African jazz and the rhythm king of Nigerian music. Never is the highlight of this polyrhythmic cook-off, a rollicking afrobeat track, with Masekela on vocals as well as flugelhorn, reminding us that “Lagos never gonna be the same, without Fela”. Joe Armon Jones, of the heavily Allen indebted London outfit Ezra Collective provides delicate keyboard work which has been sensitively added to the mix along with the bass playing of Tom Herbert (Polar Bear/Acoustic Ladyland). The perfect farewell, really.