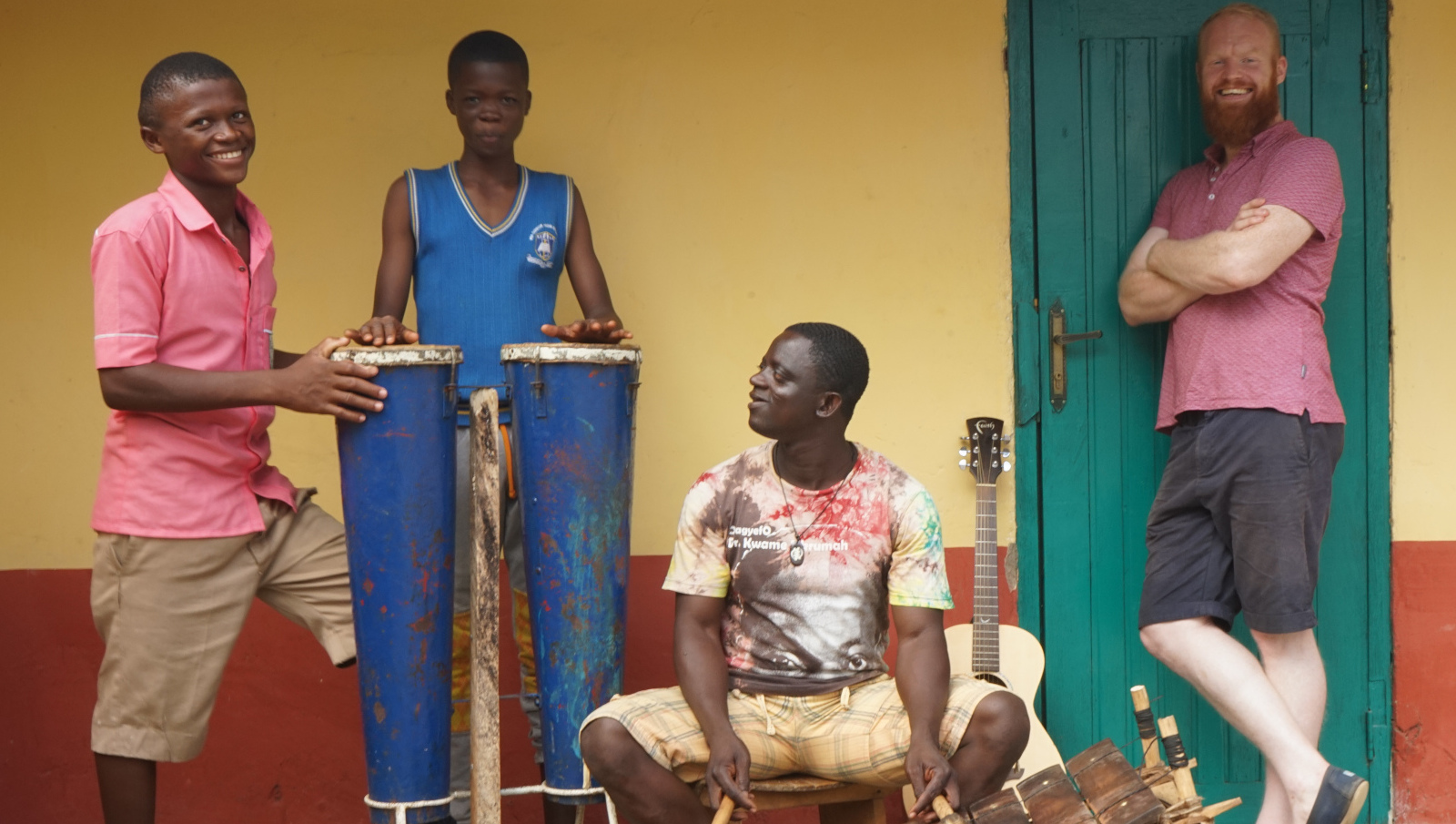 Hi, Sonny. How are you?
Very well, thank you.

So you are Leeds born and bred, Sonny?
Huddersfield. Just down the road. I’ve travelled around a bit but I’m back in Huddersfield again now.

Leeds has always had a rich musical heritage, especially in club land back in the late 80’s and early 90’s. I appreciate that was prob a bit before your time but were you influenced by what was going on around you at the time in Leeds?
I guess so. I went to Leeds College Of Music when I was 16, so I was in and around Leeds learning. I was more influenced by the Jazz scene around the college and at the Wardrobe just across from it. I was also influenced by the West Indian carnivals in Huddersfield and Leeds around that time.

You mentioned the college of music, was your goal to go straight out of school and into music?
Yeh, from the age of about 14 or 15 I knew I was going to be a musician but I decided to have a fall back career, so I went to the college to do music technology. Within 6 months of being at college I had decided that I didn’t want to be a musician and set my sights on becoming the next, George Martin! 2 years at Leeds I went to London to do a degree, so it was quite direct what I was doing.

You have been worked with the likes of Tony Allen, Fatoumata Diawara, Ibrahim Ferrer, Ali Farka Toure and Oumou Sangare. How did that come about?
I was in London for 12 years and applied for an internship at Livingstone studios in Wood Green, to get some experience in between leaving Uni and setting up a studio with a friend of mine. Livingstone studio’s just so happened to be owned by Nick Gold of World Circuit Records and Jerry Boys before him. The focus was on Cuban and West African artists. It was lucky that I saw the internship, applied and got it. I was aware of Buena Vista Social Club. I knew Jerry’s work and the work of World Circuit through growing up and listening to my Mum and Uncle’s music. I was one of the few people who came through the internship that really enjoyed and understood the music that they were making. To me it was a lot like the Folk and Soul music that I had listened to as a kid, it was just in a different language. There are differences obviously but there is a similar theme.

Wow! A stroke a luck dropping into that studio straight after Uni. You worked with, Tony Allen also?
Yeh, that was through World Circuit too. I was mixing records and developing my own ideas. I have to thank Jerry for being open and allowing me the room to explore my work. Tony had already recorded an album and wanted Nick to mix and release it. I had heard the rough album and fell in love with it. It was Jerry actually, who suggested that I would be the man to mix the record. I was extremely lucky that the people I worked under were happy to hand the baton over and trusted me enough to do the job. I’ve been very fortuitous.

So working through the Livingstone studio’s really forged a path for you?
Yes, from there I got a name for myself and UK artists were then seeking me out, London Afrobeat Collective, for example wanted me to work with them after hearing the Tony Allen record. You could say that Jerry and I have been destined to work together and that path was already been trodden by me from a young age listening to his music.

You have worked on a number of critically acclaimed albums through Livingstone, Grammy and MOBO nominated. You also worked on the Mercury nominated album by Dinosaur?
That branch of my career shot up in parallel to the other work I was doing. Portico Quartet came into Livingstone to have a look at the studios and we hit it off. I ended up working on their debut album ‘Knee Deep In The North Sea’ and it was also my first co-produced record. That was the first album I worked on to be Mercury nominated. From there I met Seb Rochford and Polar Bear and then Mark Lockheart introduced me to Laura from, Dinosaur. That Jazz side of my career ran separately to the work I was doing with World Circuit.

Amazing! So you formed the Rail Abandon some while later and this new album isn’t the first release I understand?
No, the first Rail Abandon record was released in 2017.

How did you guys hear about and end up working with, Isaac Birituro?
I went to Guatemala, as I wanted to learn Spanish. I met Tim Becker & Svenja Albers, who ran Rut’n’Rock festivals in Germany. They are a charity and curate music projects to raise money and were at that time building development projects in a town called Kalba in North Ghana. I had the idea of combining my knowledge of production of West African records and their knowledge of the charity to make a record to raise money for the town. A year after that we were in Ghana and Tim introduced me to an old friend of his, Edmund. He brought his son along, who was Isaac. They were both Xylophone makers and players and they had brought one along with them that they had made. Isaac told me that there are people who make Xylophone’s that don’t play them but there is no one in the area, who plays them and doesn’t make them. In Ghana you have to know how to make them if you are going to play. Isaac started playing in the courtyard and he was amazing. It reminded of the Malian Balafon instruments that were used by the likes of Oumou Sangare. I went and got my guitar and we hit it off. I remember Isaac smiling back at me when he heard me playing the guitar.

What a lovely meeting of minds. I heard the album was recorded in just 3 days, is that right?
The basis of the album was recorded in 3 days in the local church in Kalba. It was Isaac, two local percussionists and me. I then brought it back to the UK and asked a lot of people I knew to come and work on it and we added drums and horns. We then crowd funded to go back to Kalba, so we could add Isaac’s musicians as well as the local choir, who sang in the church there. They sang in their local dialect, which is called Birifor. 28 musicians in total worked on the album. So yeh, it was worked on over a few months with a session here and there but the basis was mine and Isaac’s work over those 3 days.

I spoke to Damon Albarn a while ago and he said that when he goes to Africa for his Africa Express projects and the same for the DRC project the albums are recorded in less than a week. Is it a way that African musicians work in particular and does their natural ability allow for the process to work so fluid?
Yeh, it’s mostly to do with the nature of the musicians and the music. I think the reason that I enjoy the African and Jazz music that I have worked on is because the mentality behind the recordings is very similar. Everyone works off each other and they do it live all the time. Get in the studio, do a few takes and then record it. Also, I would imagine that a lot of African musicians wouldn’t have the resources to be in a studio for 6 months at a time, even the more established artists. It’s a case of knowing the music already, so just get in the studio and get it recorded. These guys are talented musicians and they have to be to hold their own and make a living from it, so you can go in the studio and knock out tunes quickly.

Were you and our friends at Wah Wah already known to each other at the point of them hearing the album?
I knew of Wah Wah but I hadn’t met, or worked with them. I was looking for a label and a friend of mine, Yelfris Valdes, who is a Cuban trumpet player in London, suggested I try Wah Wah. He said that he had heard good things about them and said that they really looked after their artists, which was important to me, especially as I wanted to look after Isaac. I also know Idris Rahman of the Soothsayers, who records for Wah Wah. I sent him the demo and he passed it to Dom Servini and here we are. Dom has been amazing and I was made to feel like one of the family within a short time. I couldn’t think of anywhere I would rather it would be. I think the album is very at home on Wah Wah 45s.

You have done a couple dates with the Rail Abandon and the Kalba band, any plans to get Isaac over and tour the album in full?
Yes, there were plans to bring Isaac over but our government decided to deny him a Visa, so he won’t be able to come over this time at least.
After that shocking news I had to look through my contacts and incredibly I have been introduced to a xylophone player from Burkina Faso, who lives in London now. He actually knows Isaac from Accras as they both had stalls in the arts centre there. Crazy fortuitous again! He stepped in to play Isaac’s music and he’s been amazing. He’s learned the tunes inside out and has put so much effort into learning a style of music that he knew of but has never played, as his heritage is from Mali and it’s a different style of playing.
So, we have our band and are playing a few festivals, Cloudspotting in a couple of weeks and We Out Here and plans to do tours at the end of the year and into next year.

Do you think there’s any chance of getting him over for any of the festivals, or has it been ruled out for this year?
I think it’s too late for this year, unfortunately. I’m going to try again next year but we will have to see what happens. Tim and Svenja are applying for a Visa for him to go to Germany and hopefully the Germans are more lenient than our government at present.

How disappointing! A bit of a dream come true to record a record like this and then have the opportunity to tour only to be knocked back by the UK government. Sad!
Yes. He said that he’s disappointing but it’s not the end of the World. He’s happy his music is being played and he knows his time will come.

Any plans outside of The Rail Abandon Project, Sonny? Any other projects you are working on?
I’m also the bass player and producer of a band called Pica Pica and we’re signed to Rough Trade. Our debut album is out this week also. So, two records out in the space of a week of each other and two different styles of music. There will be a lot of my bass being played in the coming months!