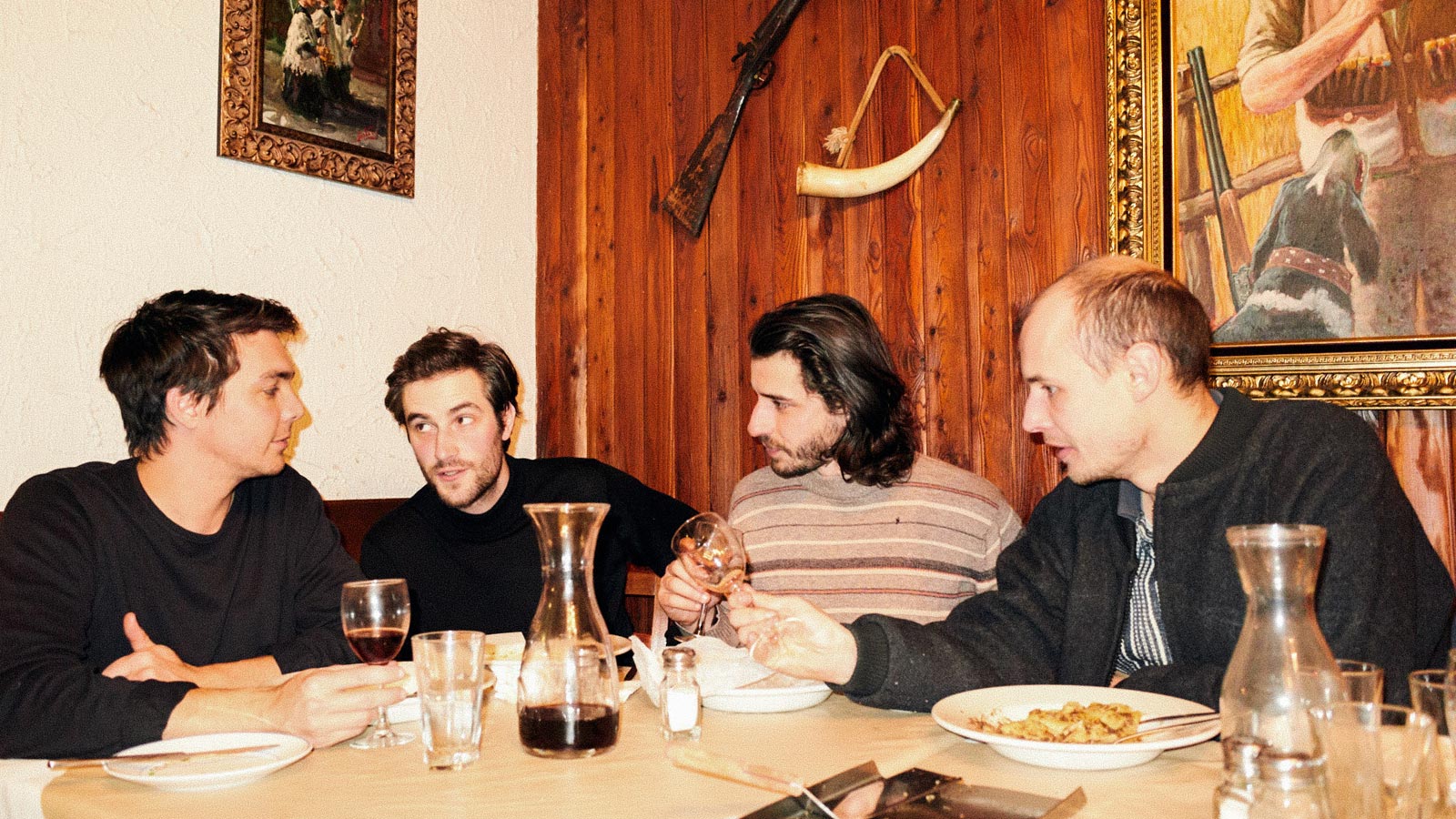 Starting at the beginning then, Kev. How long have you guys been performing together as a band?
The band probably started doing this thing in 2011/12. It was a little different back then. So, it’s been a while and it’s taken a while to try and get this album out.

I think it’s easy for people to hear a record and think that you may have just got together a year or two years ago without realising how long you guys have been working on putting something out that you are happy with.
Yeh, we have been kept busy doing other things but kept the band going but then we got to the point where we wanted to create an album that we were all super happy with and we don’t really care what anyone else thinks and we knuckled down on to get that done.  As we were getting that together, Research Records, saw us at a couple of gigs and then asked if we had got an album for them to hear. We sent what we had and they got right behind it. It’s great to finally have it out there, you know.

You say it’s changed a bit since it started. Has there been a shift in direction in your sound?
I suppose that if you put it up against the first music we made it might be vastly different but it’s been a gradual change over the years. We have changed a bit ourselves as musicians and our tastes have probably changed a bit. It was the same instruments with Synths, guitar, bass and drums but we didn’t quite know how to glue it all together back then. So maybe our sound was a bit more varied and not as focused as it is now. I mean, we like to have variation in our sound now but we have come together and know exactly what we want now, we probably just experimenting around back then.

I’ve heard your music categorised as so many different things; space jazz, psychedelic Disco, cosmic dream pop. The quality of this record is that it really is quite a unique sound. Who do you draw your influences from?
*Laughs* we have all got our own influences but there’s a lot of overlap. Personally, I have been getting into a lot of library music in the last couple of years and people like Brian Bennett are a big influence for me sonically. Adam is a really big Jazz head, so he’s always brining that stuff. Tom is a big collector and Jimmy is always bringing his new beats, so we are all getting together and listening to stuff from modern dance music to Modal jazz.  We pick up and what vibe comes across and try and work that into a track.

There’s some dispute in our ranks of who discovered you guys first and who was first to play the record. There are 180 people loosely involved in the station with 120 odd live shows a month. What isn’t in dispute is that a good number of our roster jumped on the record after it got dropped for the first time and it’s been suitably rinsed by many in the last few months. It’s quite a debut record.
That’s good to hear, that’s great! I think we were just happy to get something done that we were all happy with. When the single came out we were quite surprised that it took off well because it’s quite a long track, so we were knew we wouldn’t get a lot of radio play but we weren’t that bothered by that.  Then a few local stations in Melbourne did start playing it and then all of a sudden it gets popped up in the UK. A big thing for us was Gilles Peterson playing the record on the BBC, which then helped to open us up to a new audience in the UK and beyond. That took us to a point where we thought, shit! We can probably look to bring this over to Europe on tour. That’s where it started properly.

I was just going to come on to that. I was actually listening to the show when Gilles dropped it. As mentioned we were familiar with you guys already at that point but it was really nice to hear that the word was out it being played on National radio. Did you expect the response you got outside of Australia so quickly?
No, not really. I work with Tom and we are always listening and streaming shows from a couple of days after certain shows. DJ’s and shows like yourself, NTS and Redlight and what have you. So, we are listening to that kind of thing and it’s a general sound that we would pull from as well. So, it wasn’t like we didn’t think that our music would fit but to actually get the traction that allowed us to get over there and visit is quite surprising really. We always thought that it would be nice to be able to come over if it got picked up but for it to happen so quickly is surprising.

Yeh, we are all very excited to have you guys over. There’s a buzz around the station for you.  Is this the first time you have visited the UK?
It’s the first time for myself, I think that Tom and Adam have been and although I travelled around when I was a bit younger but my first time in the UK. I heard it’s pretty hot over there right now. So it will be interesting to see what you Brits think hot really is.

Haha! Yeh, it’s lovely and makes a nice change but it will probably be snowing by then, so bring your coat!
A bit of a random one for me, as I’m digging the label already, we had Ari from Plug Seven records in the studio a couple of weeks ago with, Lee Bright, from BBE.  I’m guessing you know these guys?
Oh, yeh? Great! I don’t really know Ari personally, although Plug Seven is only up the road from me. He’s more a mate of a mate. We are probably closer to a guy at Northside records, which is also just up the road. In the last maybe 5 years there has been a surge of record shops opening in North Melbourne, which has kind of merged the live music scene with like a DJ record collector scene. The electronic and dance scene has had a nice crossover with the live music scene in Melbourne and I think having these new record stored opening has really helped the scene grow. There’s a lot of exciting stuff happening in Melbourne right now.

Touching on what you said earlier, are you guys all diggers then, you collect vinyl?
Yeh, we like to get about and see what we can find. In Australia it’s kind of heard to find the more obscure stuff and the gems we want, so it will be great to come to Europe and have a look.  We went to Japan a couple of years ago and that was a great experience as well.

On the Melbourne scene then, I find myself buying and playing more by local artists. We all know of The Avalanches, Hiatus Kaiyote and Nai Palm, as well as other bands like King Gizzard and The Lizard Wizard and also 30/70, whom we are more familiar with over here because of Rhythm Section but as mentioned I have been digging new bands like War Baby and Zeitgeist Freedom Energy Exchange. It seems like there’s a proper movement out there?
Yeh, there’s always been a good scene in Melbourne with the fact that there is a lot of great venues to play at and it always had a great live scene to begin with. Also, there’s been a change in the lockout laws in Sydney, which meant that maybe other musicians have moved to Melbourne because it offers the support that they want.  In previous years I guess Hiatus Kaiyote were a bit of a breakthrough act for Melbourne but it’s always had a great music culture. It’s just nice that it’s being recognised everywhere else now.

It’s great what’s happening over there. Like Melbourne, London and other places in the UK have seen a really strong movement in the last few years. Are there any artists out of the UK that you guys are following?
To be honest we aren’t really listening to a lot of contemporary music, which sounds weird. We know the likes of Yussef Kamaal but to be honest I’m a bit out of the loop with what’s going on, other than the fact that I know that there’s a lot going on over there.

What next for you guys then, Kev. Is it life on the road for the foreseeable?
It’s a bit of that, it’s the UK tour coming up and then we then come back to Australia for our summer, which is pretty chocka at the moment. We have festivals leading up to the end of the year and early next year. We have a 7” coming out at the end of the year and then we will be back in the studio for the 2nd album. Creatively it’s a little bit daunting but we are pretty keen get in there and make something of it.  We don’t think it needs to be the same as Phase and we want to feel like we have done something new and tested ourselves a bit. We are pretty excited to crack on with it.

I know you have had chance to live with this album and will have toured it well, we are looking forward to getting you guys over for sure. There’s a proper buzz for the event.
Yeh, it’s going to be great to show it to a new audience.  In Melbourne I suppose there was a good turn out after the album came out and we won new supporters but there were a lot of people who had seen us before and are somewhat familiar with us. It will be great to show it to a totally fresh audience and who are seeing us in a different context to what our local audience has.

Just to say a big thank you for your time and we will continue to rinse the album and the remixes. Look forward to seeing you soon.
Yeh, thanks Mike. We are really excited to be coming over, see you soon.