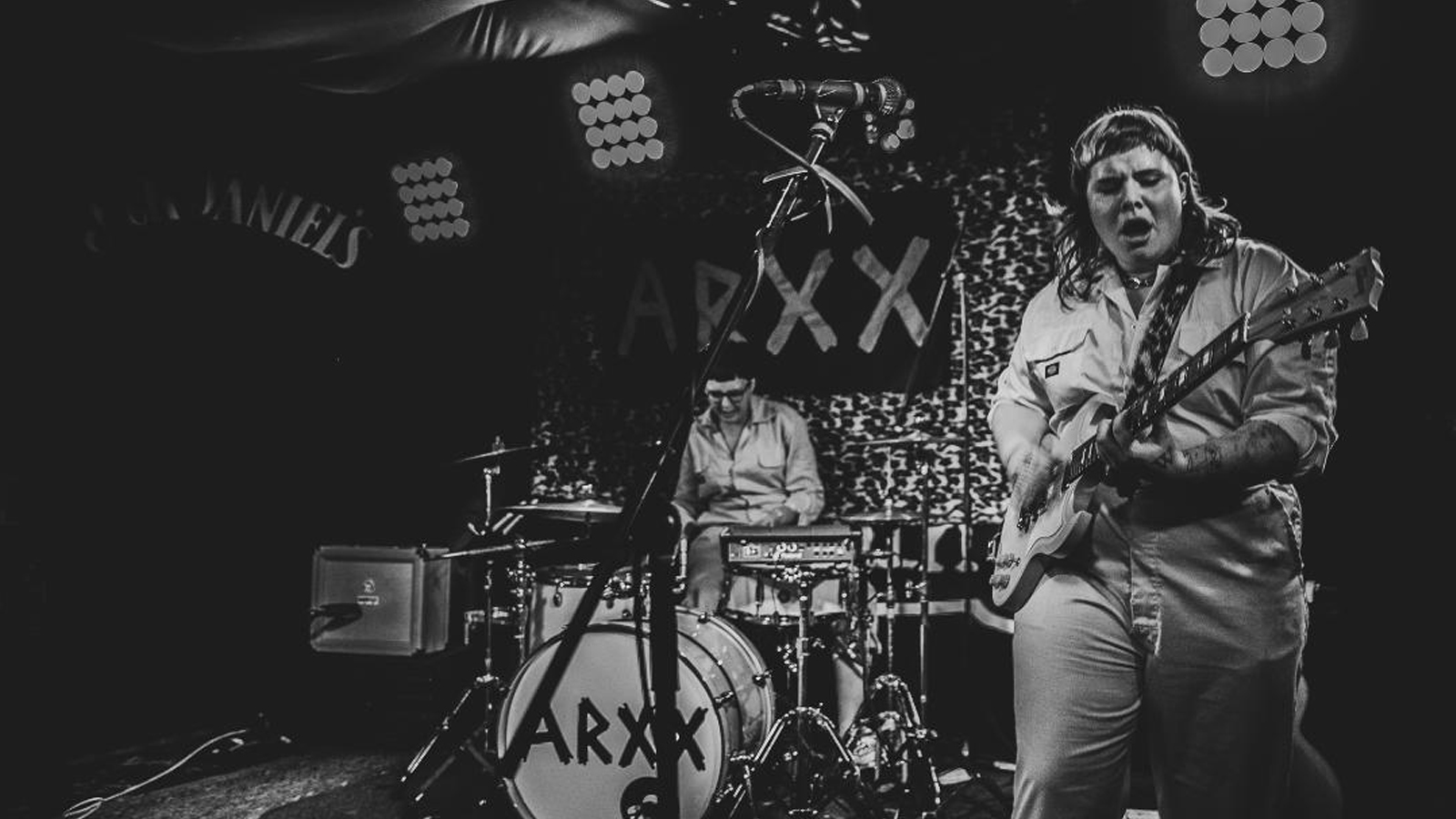 So thought I would kick this interview off by asking what big things are on the horizon for you guys?
Clara: So, 22nd November, we have an EP launch. 20th November, a gig in Brighton at The Prince Albert.

Nice.
Clara: … and then 27th November, we have a gig at London’s Shacklewell Arms, for NME’s Girls to the Front show.

Amazing.
Clara: Yeah, so that’s our big one, that’ll be fun.

I mean, Girls to the Front shows wise, I noticed Dream Wife did one of those.
Clara: We gigged with them last year, we did a tour vinyl with them. So all the supports around the country – they got local supports for their shows – had their tunes remixed and they put it out on vinyl and then released it on Rough Trade. Then NME found us through that.

I met Dream Wife, I started chatting to them and I just thought I’d get a photo with them, but we ended up hanging out for a lot of the evening.
Clara: Yeah they are the loveliest people.

Is it going to be made up of the material you do onstage? or is it new stuff or …
Hannah: It’s new, but we’ve played it all live, so it’s kind of a snapshot, of where we are right now and then we will be writing more over the winter.
Clara: When we finish tour we’ll be doing a few things.
Hannah: I’ve got so many scribbles everywhere and voice notes of me singing in the bathroom like ‘song idea 5’.
(more laughter)

The Recording process … A lot of people record at home and some people do it in studio, where did you record the EP?
Hannah: We’ve only ever recorded in studios together.
Clara: Yeah.
Hannah: Just because I don’t think either of our neighbours would be happy! We go to Brighton Electric, which is where we practice and I’ve been practicing there with bands for 8 years now. So it’s kind of like a second home.
Clara: Yeah it’s a homely vibe.
Hannah: Everyone is really nice. We’ve recently, on this last EP, started recording with a producer and kind of sticking to one producer, which is really nice. Because it’s more creative I guess and we’re working with Steve Ansell from Blood Red Shoes.

I’ve never met him but I’ve met Laura, I DJ’d with her once and she was really lovely.
Clara: Steve’s amazing. They’re a two piece as well, so he kind gets what we want and is just is super patient and is really good at getting the sound that you want.
Hannah: Also I think he finds us a bit hilarious, because he’s a man who likes touring/partying and then there’s us with our celery and our super food smoothies and we want to be in bed by 10 and he’s like “No it gets really creative after midnight …” and I’m like “Nothing about me is creative after midnight!”
(more laughter, as with their stage banter there was a lot of giggling in this interview)
Clara: We do get tired when he’s like still working at 8pm.
Hannah: We’re a bit like the um, stuck up students, when it comes to recording. We do loads of pre-production and we’ll have all the BPMs set, really really prepared because if we didn’t I’d be amazed to see what came out … we just end up recording like Telly Tubbies … We like to prepare ourselves.

It was quite interesting watching you drum Clara, I didn’t realise how fast you play, it’s impressive.
Clara: I think just because there is two people, you kinda have to fill that space and keep that energy, because the guitar is quite active in there, but if I stop, automatically half of it drops out so you’ve not got the luxury of having other people with the bass chugging along, there’s none of that so yeah!
Hannah: Also when we’re playing live we’re just really excited. So we tend to play slightly faster than normal.

So, my last question which should have been my first question really. How did you guys meet, how did you come to form a band?
Hannah: So, we met a few times years ago, I was playing with a different drummer, Clara was playing in a different band and we played a couple of bills together and we didn’t know each other, we just knew of each other and then my other drummer moved to Australia.

Okay, haha.
Hannah: And then I needed to find a drummer and I was looking for maybe two years couldn’t find anyone and I was ready to give up really.

Ahhhhh noooooo!
Hannah: … and go back to Wiltshire and then I was like, oh I’ll try this … I just messaged a couple of people saying, do you know anyone ? And Clara was just like “Oh yes! … I will audition please”. We jammed together for 20 minutes and I was like “yep this is going to work!”.

Awwww well I’m glad you guys found each other, great music, great tunes and great show tonight at The Hope and Ruin. Thanks for doing this interview with us.
ARXX: Thanks. That’s all alright.

Black Feather can be heard DJing on 1BTN in various random slots through the week!