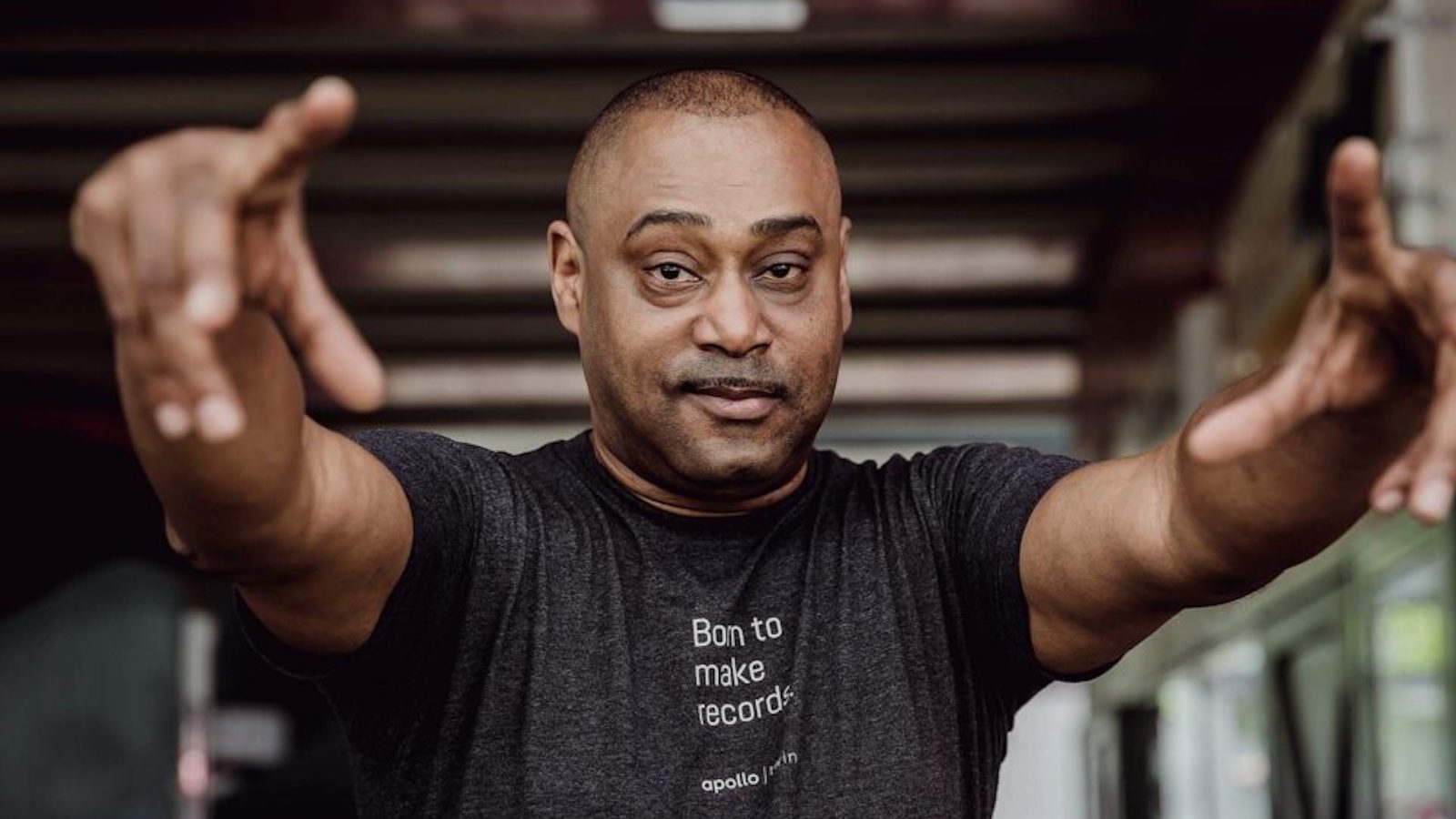 It is with deep sadness that we learn today of the death of another great of the electronic music scene. Detroit music icon Mike Huckaby passed away on Friday April 24th. Condolences and tributes are been shared across different social media timelines of his death and it is here that we learn of the sad news. Fellow Detroit DJ and producer, Delano Smith, set up a GoFundMe page to help Mike overcome an unnamed medical setback. The cause of death is still unknown at this point.

Mike leaves behind an incredible legacy and is without question, one of the greatest DJs and producers in the history of electronic dance music. The man behind the once legendary Record Time store with Rick Wade and others had gathered an encyclopedic knowledge of music.

Mike Huckaby always brought the Detroit sounds of deep house and techno with him and his diversity as a DJ saw him hold court in any room he was asked to play. Mike Huckaby was one of electronic music’s teachers, a man who told us that he would never leave his home city of Detroit, tutoring kids on music production in his home city and who also went on to teach refugee kids from war torn countries, in Berlin. Mike was a deep house producer who spent years honing his skills.

Mike was a top notch producer releasing records in the mid 90’s on Rick Wade’s ‘Harmonie Park’ record label before going on to create two of his own imprints in ‘Deep Transportation’ and ‘S Y N T H’.
For the last 25 years Mike Huckaby has been an in demand DJ and has played clubs, events and festivals all over the World. Amongst his vast array of projects Mike also went on to publish his knowledge in the form of his renowned sampler CDs.

Mickey Duke in conversation with, Mike Huckaby. Recorded May 2019.

Whereabouts are you in the world right now, are you still in Detroit?
Yeah I’m here for the festival

So, we’re doing something called ‘Detroit Day’ here on 1BTN, which is for 24-hours and a celebration of the music to come out of your fine city. Before we get into talking about Detroit I would like to get a little background on you, Mike. Where did the love of music start for you?
Well, it’s like I always say man, in Detroit the music finds you you, you just need to find a way to participate in it. I had strong influences from my parents, as they were always playing music around the house. We had the Motown sound and I used to love the sound of Stevie Wonder’s synthesizers, of course we had George Clinton and the whole P-funk sound. The whiole P-funk era really kicked it off for us. Of course radio had a big part to play in all of this as well with the electrifying MOJO show. All of these fertile breeding grounds led to the development of Detroit techno

What was the track that made the difference for you as a producer back in the day?
It was probably ‘No UFO’S’ by model 500, that whole Cybertron album, ‘The Sound’ by Kevin Maurice Sanderson, and then things were happening in Chicago as well. Larry heard with the ‘Slam Dance’ track made me question everything, now I see that you have to play everything yourself, the drums, the whole lot! Where as before you used to maybe hire a guy in to do the bassline for you, now here was this guy doing it all. Yeah it was the ‘Slam Dance’ EP that made me say ‘Wow man! You have to be seriously talented to be able to make this kind of music’ You had like deep house on one side and then there’s aggressive track on the other side.

Your first recordings were to Rick Wade’s record label, so was it more about the Deep House sound for you rather than traditional Techno sound back in the day?
Well you know by that time I was exploring different sounds, different chords and stuff and then it became, you know like, that was the way I was going. I didn’t class myself as a techno artist because you know know, being a techno artist in Detroit is kind of like asking a fish if he wants to join the swim team.

So, you release a lot on other people’s labels but you also have two imprints of your own in ‘Deep Transportation’ & also ‘S Y N T H’ does each label possess a different meaning to you you and were they there to represent two different styles of production?
Yeh definitely, Deep Transportation was kinda like my take on house and S Y N T H was more focused towards techno. So, a lot of the bassline tracks were influenced by Kevin saunderson I have to say.

We were over in Detroit in March as part of the project we were doing, I’ve never been there before and I have to say I was blown away. It was everything I expected and much much more. On my way over I was doing a little research and I came across a quote from you, which is now the title of an excellent documentary on the Detroit scene – which I didn’t actually know about at the time – and then funnily enough while we were driving around Detroit someone text me and asked ‘have you seen this?’ and it was an advert for the documentary, which was a lovely coincidence. Can you tell me a little about that?
Well, you know it was a dream I had about Detroit. God was in the room and he was sleeping and the angels said ‘man, we’ve got to wake him up, the people in Detroit are saying that they’re starving. It’s rough out here and they can’t take it’ so one of the angels went into the room and they shook God to wake him up and said ‘God, the people out here are starving and they are saying there’s no work and they can’t afford to live’ God lifted his head and said ‘Give ’em drum machines!’

Hah! Such a brilliant quote. I love that the producers of the documentary have used that quote for their title. Did they come to you with that title of the documentary already in place or did that come afterwards?
Well, that’s what they informed me they were going to call it after my interview with them.

How do you feel about the documentary do you feel it hit the nail on the head?
Yeh it does you know you can’t really go on about Detroit techno forever, well you probably could actually but you have to stop at some point. One thing I wanted to say is that I wasn’t afraid to associate my name with techno, you know, you didn’t really have anyone like a deep house guy associating his name with techno, or lending his name to another genre. I didn’t play that. if I was feeling it I was feeling it.

It seems to me that everybody in Detroit is doing something a little bit different. This is original music.
Aha, yeh. It was definitely original. It was Juan Atkins who started it all, you know. He said it very well in a documentary you know here’s this black kid in the ghetto and record labels couldn’t understand how this young black kid had created this brand new sound *laughs*

So, we mentioned Movement earlier. Paxahau are now behind it. It’s come from this small festival curated by the originators of the Detroit techno scene to now being this massive production company driven event. How do you feel the Movement festival has changed and is it a positive thing for you?
Well, yes it’s changed now and they charge for entry where as before it used to be free. It is a big production but I have to say those guys run the festival very well, i will have to say that. We have all been friends with Paxahau for a while now, so they all have their own take on the festival, you know, with the European acts & DJs but it still works. You have to put yourself in their shoes and to attract that many partygoers from all around the world to come here, you know, is crazy. It’s definitely good for the economy of Detroit. The restaurants, the hotels, the shops are all doing really good during this week.

A question I have asked lots of Detroiters this week. What does Detroit mean to you, Mike?
Well, it means everything to me, I would never move from here. It’s always been a hard-hitting city, you know, Detroit techno is the story of your life, it’s the sound of your life. It’s your life on a piece of vinyl, you know, I can’t say that enough. You got no money, you got too many parking tickets and they put a bolt on your car, you broke up with your girlfriend your rent is due and that was all of your money to be spent on your next release. The setbacks, the difficulties of releasing records and running a label was always inherent.

So, all of the frustrations come out in the studio.
Defintely.

So, what’s next for you, Mike?
Well, I’ve just finished a remix for Rich Medina. My next S Y N T H release is an album, i can start working on that now. I have a new sampler CD And a Deep Transportation release. That’s what I’m working on.

You’re a music teacher as well, Mike, I understand.
Yeh, that’s right. I’m actually teaching in a school in Berlin for refugee kids and that just opens your eyes to life in a whole nutha realm of possibilities. A really interesting project to take place and to see kids coming from bombed out houses and to basically give them a brand new fresh start at life again.

So, this is refugees from around Europe that you’re teaching music to?
Yeah so Syria, the Lebanon and other countries where their governments are at war.

Wow! More power to you my friend and that’s amazing that you’re paying that forward and passing on all of this amazing knowledge. It just leaves me to say thank you very much for your time, Mike, you have such an incredible story to tell and your music forms part of a Dynasty with worldwide recognition. You take care and thanks again, Mike.
Thanks man, no problem. Ciao.