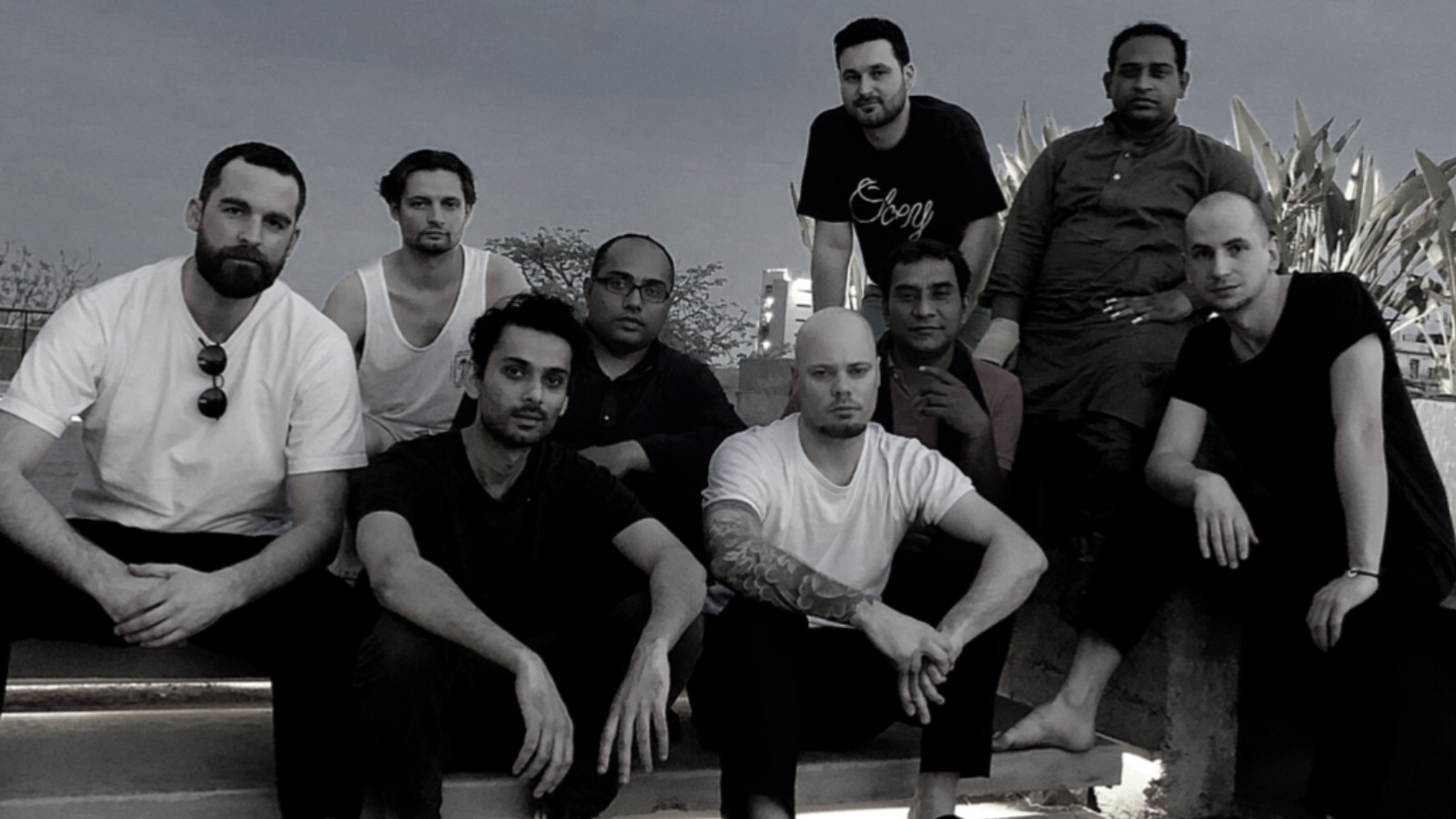 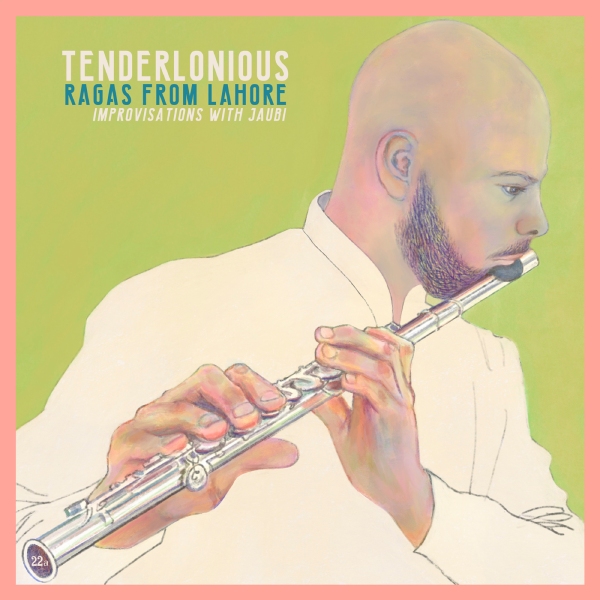 Words by 22a Records
In April 2019, 22a boss and multi-instrumentalist, Tenderlonious embarked on a trip to Pakistan to work with Lahore based instrumental quartet, Jaubi. Following on from the highly acclaimed, three track limited edition 10” vinyl release of ‘Tender in Lahore’ earlier this year, 22a presents the full suite of improvised ragas from a one day recording session in Lahore, Pakistan. The pure sounds of Indian and Pakistani classical music act as a framework for deep and spiritual improvisations between Tenderlonious on flute & soprano saxophone and Jaubi band members, Kashif Ali Dhani on tabla and vocals, Zohaib Hassan Khan on sarangi and Ali Riaz Baqar on guitar. This cross cultural collaboration also features Polish composer and keys player Marek Pędziwiatr on synth drone.

Like most of us, Ed ‘Tenderlonious’ Cawthorne has had to overcome troubles in life. Music however has always been a guiding light leading him onto the right path. It was whilst in his darkest place that he taught himself to play the soprano saxophone; bringing much needed focus and discipline back into his life. Much like his musical heroes John Coltrane and Yusef Lateef – who were both inspired by eastern spiritualism and the deep tradition of Indian classical music – Ed has always been searching for something different and much deeper.

The seeds for a young Tender to embark on this musical path were planted during his father’s secondments to the East as a Ghurkha Officer. However it was after hearing the North Indian Classical flautist Ronu Majumdar’s ‘Raga Mangal Bhairav’ that Tender knew this was a musical style that he had to explore. Ironically it was in a grimy London pub, after a few too many beers that the reality of this record started to come to life. Whilst reminiscing about previous musical journeys in Poland with Lukasz Wojciechowski from Astigmatic Records, we were reminded of an instrumental quartet from Pakistan – Jaubi. We later discovered that Jaubi is an Urdu word for “whatever/whoever”. Creating whatever sounds good, with whoever feels good, is the groups guiding principle – a vibe we could relate to. Drinks continued to flow and we further explored the idea of a trip to Lahore in Pakistan, where the band resides.

That evening after getting home from the pub, we told our families and friends that we were planning to go to Lahore and record an album with Jaubi. We were met with heavy resistance from family and government travel advice. Our families and friends regularly fed us articles about why it is dangerous to travel to Pakistan due to the risk of terrorism, kidnappings, tropical diseases, etc. – the list was endless. The Pakistani embassy also showed resistance by rejecting our visas. Twice! The project felt destined for failure, however we persevered with the Lahore dream. We learned not to believe everything people tell you. This was more than a musical quest now – it was about breaking down cultural misconceptions.

Through many hours of hard work and planning we arrived in Lahore on the 9th of April 2019, greeted with nothing but love and humility. Lahore is something special; full of positivity, care and hope. It was, thankfully, all a stark contrast to the negativity we heard about Pakistan before arriving. It was not long into the first day and that first studio session that we realised this trip would be a real awakening. Nothing whatsoever was written down during the recording sessions – no sheet music, no song titles. It was sincere. All egos were left behind and hearts and souls were open and poured into the music.

Opening track ‘Shalah Bagh’ is inspired by the Mughal gardens in Lahore we visited one morning on our trip. It is a fully improvised track guided by Kashif Ali Dhani on tabla and vocals, with Tenderlonious on soprano saxophone. Raga Chandrakauns acts as the basic framework, evolving into a free conversation between tabla and saxophone.
‘Azadi’ is the Urdu word for freedom and is a pure raga composed in the beautiful and
devotional pentatonic Raga Bairagi, also based in the 12 beat rhythmic cycle (Ektaal). Like everything during these sessions, this raga was shown to Tender moments before the one take recording and what ensued was an improvised conversation between the musicians. Featuring Jaubi members Zohaib Hassan Khan on sarangi – Zohaib is a 7th generation sarangi maestro and one of only 5 professional sarangi players left in Pakistan practicing this ancient art form. Plus Jaubi guitarist and band leader Ali Riaz Baqar, providing the guitar accompaniment.
‘Kirwani’ is a musical scale in Hindustani classical music. It is an Indian raga specially suited for instrumental music. The scale is the same as the harmonic minor in western music. Kashif Ali Dhani on tabla and Tender on flute join for a spontaneous and therapeutic exchange.

Side two begins with ‘Azeem’, which provides a peaceful moment for reflection with Tender on alto flute, Kashif Ali Dhani on vocals and Zohaib Hassan Khan on sarangi.
‘Kirwani part ii’ is an alternate take of the aforementioned original, this time featuring Tender on soprano saxophone in conversation with Kashif Ali Dhani on tabla. The album finishes with ‘Impressions’ a pure raga (Raga Ba Khizer), the taala (rhythmic cycle) is Ektaal (12 beat cycle). It is similar to the raga that Tender first heard Ronu Majumdar play. This beautiful scale, that Tender would often practice back home, becomes the musical framework for rich improvisations. Joined by Zohaib Hassan Khan on sarangi with Kashif Ali Dhani providing the stunning backdrop on tabla, weaving in and out of complex rhythmic patterns. Marek Pędziwiatr, from EABS & Astigmatic Records, provides the synth drone back drop on all of the tracks.

This album fulfils part of a dream for Tenderlonious and 22a. It would not have been possible without the help of Łukasz Wojciechowski and Astigmatic Records, who helped us bring this idea to life. The next stage is bringing these wonderful musicians from Pakistan over to the UK and Europe to record, perform and fulfil their dreams – Inshallah

Tenderlonious – Ragas from Lahore: Improvisations with JAUBI is out on 20th November on 22a Records