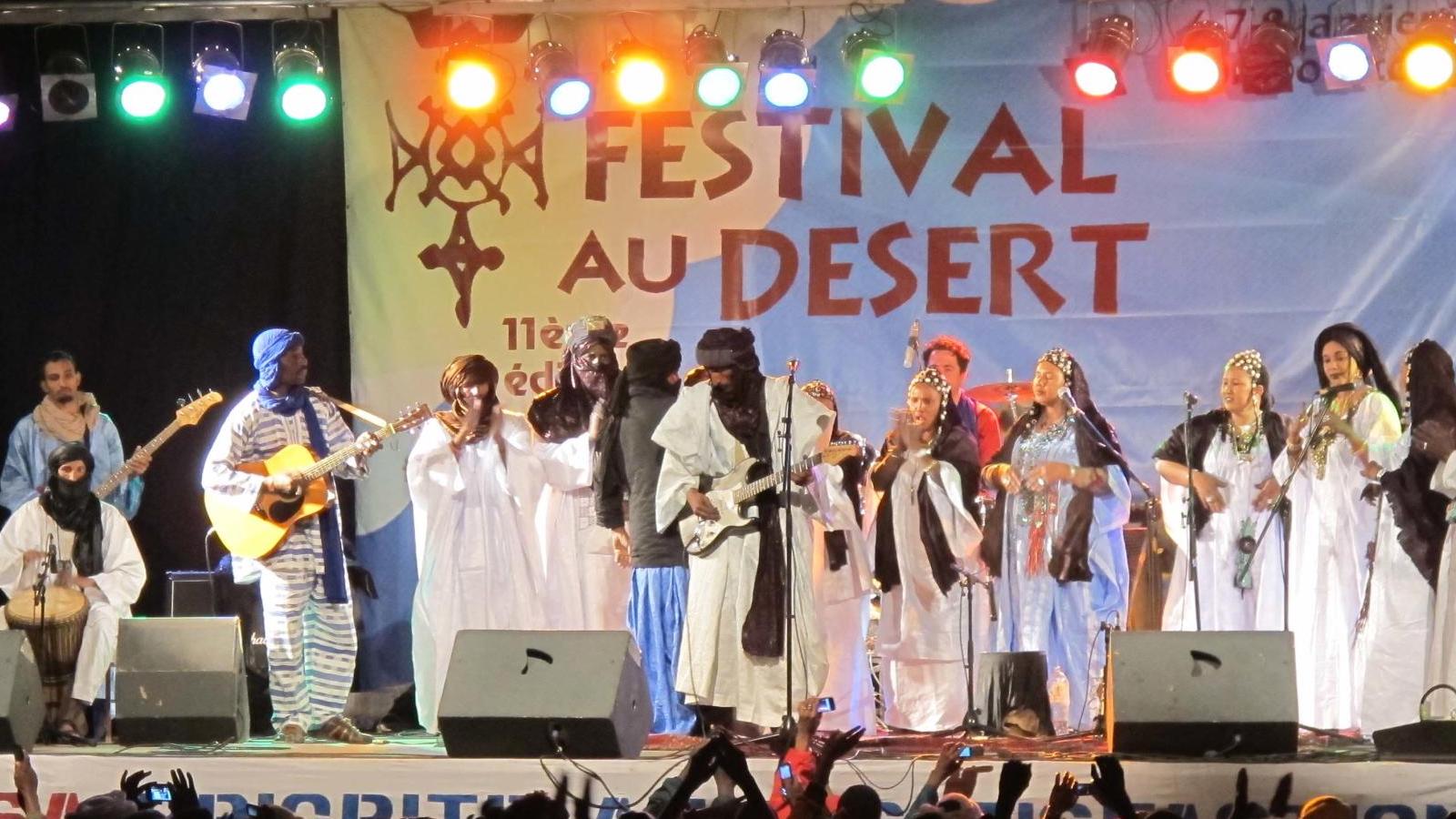 There is no shortage of films about music from Mali. To accompany a piece about the MUSIC OF MALI, 1BTN DJs Jo Dressler and Ian Lawton offer some suggestions for lockdown viewing that will get you acquainted with the country’s rich variety of music and the socio-political problems faced by its inhabitants.

If you would like to know more about the heritage of Malian music being put under threat, a good place to start is They Will Have To Kill Us First a documentary following some of the musicians who persevered through perilous times. This film features rare footage of life in refugee camps, jihadists inflicting brutal Sharia law, and treacherous journeys home to war torn cities. A story of true courage, They Will Have To Kill Us First shows the fight the musicians went through in order to carry on singing, and pays homage to and testifies just how deeply-embedded and significant, music is to the people of Mali. With a specially commissioned soundtrack from some of Malis most celebrated artists, the film features musicians including: Khaira Arby, Fadimata Disco Walet Oumar, Malian superstar Amkoullel, Moussa Sidi and introduces Songhoy Blues. Available to buy on Amazon Prime and Apple TV and directly.

For further insight into the suffering undergone while under control of Jihadists, seek out Timbuktu a harrowing yet poignant film starring Fatoumata Diawara. Nominated for many film awards including a BAFTA, an African Movie Academy Award and garnering rave reviews all over the globe, The New York Times declared it the “Best film of the 20th century do far” in 2017. Shot in Oualata, a town in south-east Mauritiana, it tells the true story of a couple who were sentenced to death, mercilessly, having been together outside of wedlock. An education as much as a masterpiece and an agonizing watch, this film points out the morbid truth, that whilst humanity is defined by humour and our ability to decorate and embellish our lives, it is paradoxically shaped with excruciatingly heartbreaking narrative. It might leave you cold in your seat, though plentiful in knowledge and empathy. Available on Amazon Prime.

A Visit to Ali Farka Touré is the English language version of the French film by director Marc Huraux, Le miel n’est jamais bon dans une seule bouche (Honey is never good in one mouth), released in 2000. After his celebrated 1994 collaboration with Ry Cooder, Talking Timbuktu, the legendary African guitarist/singer took a break from recording and from most international engagements returning to Mali to connect with his homeland. This biographical film portrait captures Ali after the recording of the album Niafunké (1999) and shows him in the village of the same name on the banks of the River Niger, going about his daily business in this impoverished area, checking water pumps, growing rice and fruit, and fulfilling his role and responsibilities as an important local figure   and agent of social change. We get to hear about the time he was possessed by a spirit, about his voodoo seer/healer grandma and his dislike of the feudal culture still hanging over Mali. There are some killer live recordings of Ali playing versions of tracks from the album, and also the Ry Cooder record, in his native habitat. Lovely.

Dambé – The Mali Project is a 2008 film following Liam O’Maonlai (Hothouse Flowers) and Paddy Keenan (Bothy Band) on their musical journey to the Festival au Désert in Mali. Their journey takes them along the river Niger, covering thousands of miles, stopping in villages and river towns such as Mopti and Djenné, playing instruments such as the harp, bodhrán, whistles and Uilleann pipes with local musicians including Afel Bocoum and the incomparable Toumani Diabaté. The remarkable thing about the film is how beautifully the traditional Irish music combines with the Malian music, and how responsive the music loving native people are to it. Despite the heat and dust and alien surroundings Keenan, being from a travelling family himself, is an empathetic guide and seems to melt into the culture of the Tuareg nomads. “There’s a coming home in this place where music flows”, he says of Mali. Also there’s some good footage of Ali Farke Touré.

2008 seems to have been the year for this kinda film – Western musician goes on African musical odyssey. Throw Down Your Heart follows American banjo virtuoso Béla Fleck as he goes in search of the origins of his instrument. Hooking up with local musicians on the way, his journey takes him from Uganda to Tanzania to Gambia (where he encounters the akonting, a three-string forerunner of the banjo) and finally to Mali, where  he meets and plays with guitarist Djelimady Tounkara (a bonkers testosterone virtuoso play off!) and Oumou Sangare (a sensitive heart rending duet). Again the meeting of different folk instrumentation is very gratifying and illuminating.

The Last Song Before the War is a feature-length documentary that captures the inspiring rise of the aforementioned annual Festival au Désert, in part a gathering of all the nomadic Tuareg born alongside a traditional festival. There are loads of great musical performances from Tinariwen, Vieux Farka Touré (son of Ali), Khaira Arby, Tartit and others. The film reveals the challenges and triumphs of creating an artistic event in such difficult economic and political circumstances. Full version available to rent here.

In Mali Blues Ngoni player Bassekou Kouyaté tells us proudly that Mali is the birthplace of blues and jazz, brought later by abducted slaves to America’s cotton fields. The film follows Fatoumata Diawara as she prepares for her first-ever concert performance in her home country of Mali at the Festival of the Niger in 2015. On the way we meet other committed musicians who are fighting for unity and the freedom to express themselves through their music like Kouyaté, street rapper Master Soumy and Tuareg band leader Ahmed Ag Kaedi. Rent it online here for the price of a coffee.

Celidja Pornon’s short film was made to accompany the release of Tinariwen‘s 2019 album Amajdar. Having finished an international tour in 2018 in support of their previous album Elwan the band were unable to return to their home in northern Mali because of sectarian violence. The group instead decamped in Morocco and embarked on a multi-month journey through Western Sahara and Mauritania, collaborating with local musicians at several stops along the way and writing songs while camped out in the desert. The story is a romantic one, recording from a camper van renovated into a mobile studio, the main substance of the recordings for this album were laid down under the stars on pitstops, on their journey through the desert, as is habitual for the Tuareg people, other collaborators were later overdubbed. Amongst them, Cass McCombs, Warren Ellis (Nick Cave, Dirty Three) and Stephen O’Malley of Sunn O))) are featured on the album.

Not from Mali, but from neighbouring Niger, and also on the Tuareg tip. Akounak Tedalat Taha Tazoughai is Tuareg language fictional film, based on Prince’s rock-u-drama Purple Rain (of course it is!). Akounak or Rain the Color Blue with a Little Red in it (called that cause there’s not a Tuareg word for purple apparently) explores the world of a musician trying to succeed in the subculture of the Niger guitar scene. The central protagonist is the musician Mdou Moctar, who first became hugely popular across the Sahel when his trippy autotuned-vocal wig outs (see the album Anar 2008) went viral through cell-phone music trading networks (you can’t make this stuff up). You can rent the full version for the price of a beer here.

In this 40 minute film Africa Express Presents: Terry Riley’s In C Mali. Director Roland Hamilton takes us on a journey through the streets of Bamako and into a makeshift studio at a local youth club, offering glimpses of the creative process behind this reinterpretation of Terry Riley’s minimalist classic In C, featuring Malian musicians (Kalifa Koné, Mémé Koné, Modibo Diawara and others) and Western musicians inc. Damon Albarn.