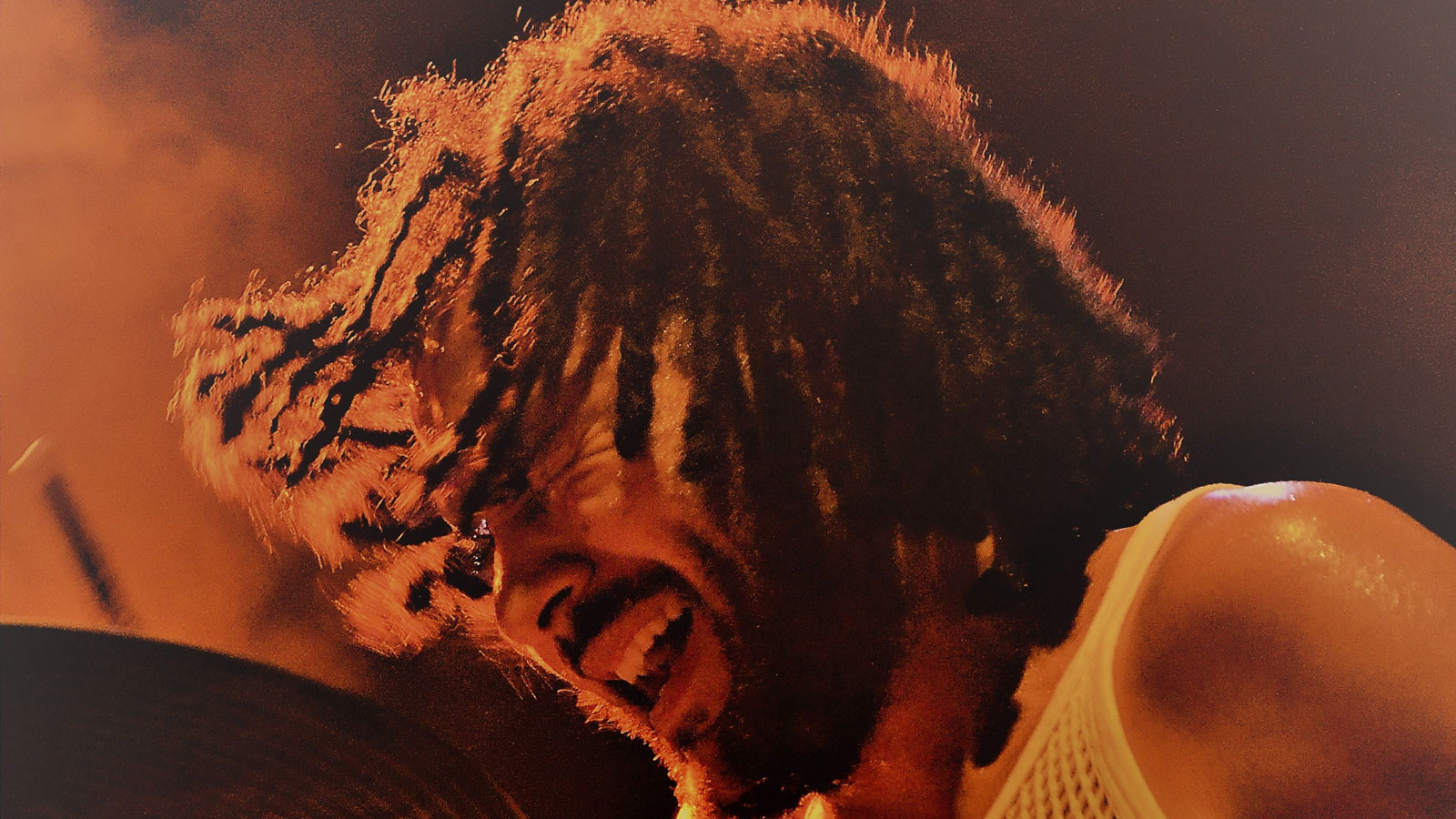 Jazz Re:Freshed’s Jazz Re:Fest, now in its sixth year, has become an important focal point for the UK’s rapidly growing community of young jazz musicians. This year it took a holiday from the Southbank for a day trip to the seaside. London’s loss was Brighton’s gain.

Only the keenest ticket holders are there for the start of proceedings but Vels Trio get things underway. Their live aplomb is no secret to Brighton jazz heads, bassist Cameron Dawson being a local, and their gigs being abundant here, but it’s great to see them take to the big stage at Brighton Dome, and they make the leap, seemingly unphased. Opener The Wad, their latest release on Total Refreshment Centre, is an ear-worm synth jam that brings to mind Harvey Sutherland’s Bermuda, full of circling Moog Phatty lines and a departure from the more straightforward piano, bass, drums stuff that they were gigging with early on. After that they took the opportunity to try out a couple of new tunes on us, finishing with a mesmerising track hanging on a cycling bass riff with a bad ass drop into a polyrhythmic second section. There is obviously so much more to come from these three.

Leeds electronic soul outfit Noya Rao played a very well received set at The Great Escape in May as part of a brilliant night at Patterns alongside Ashley Henry, Sons of Kemet and Yussef Dayes, and it was great to have them back in Brighton for another, albeit brief, performance. Compared to a lot of what we are going to see and hear today, the band’s playing is restrained and most definitely in the service of Olivia Bhattacharjee’s clear uncomplicated vocals and songwriting. They are a tight unit, their playing is sensitive, and solo excursions are kept to a minimum as they run through a set of material from their Icaros album released at the end of last year on Matthew Halsall’s Gondwana Records. A good percentage of their material has an ethereal spacious quality, particularly opener Azimuth, and Dreaming Part I which are perfect sunny afternoon festival gear. Some of the vocal melodies bring to mind Lianne La Havas, although Bhattacharjee’s voice isn’t as obviousy gigantic, but this is the kind of territory we are in. Midas and I Feel are two of the strongest, more poppy and upbeat songs from their album but closer Golden Claw, a tune with a darker edge, full of throbbing synth lines, is the one that makes you think they might crossover to a much bigger audience beyond the jazz cognoscenti.

Upright bass player Daniel Casimir is a key player in the Jazz Re:Freshed family, having put out his own debut ‘Escapee’ through the label, having played on Nubya Garcia’s Nubya’s 5ive and having been a regular sideman for keys player Ashley Henry. He has also played with elder statesmen, the likes of Julian Joseph and Lonnie Liston Smith. The band tonight is completely different than the one which played on last year’s escapee, which featured Moses Boyd at the kit and the omnipresent Joe Armon Jones on keys, and correspondingly the material is all new. We are in a more distinctly ‘jazz’ territory and Casimir takes a long bass solo in the opening track to let us now what he’s made of (he’s a virtuoso player) but it hangs together better when the rhythm section holds down a groove and we get to hear the chops of Al MacSween on keys and the dazzling playing of Tobie Carpenter, leaving us wondering if he’s hiding his light under a bushel with tin pan alley style outpourings of his own organ trio. The collaboration between Casimir and Tess Hirst, who appears on Escapee, appears to be mutually inspirational (even as just a duo) and she takes the stage for a couple of tracks finishing with a track called Securtiy. Half sung/half spoken, in the manner of Gil Scott Heron, her vocals draw on a rich history of jazz/poetry fusion:

Chilled London duo Blue Lab Beats are more beneficiaries of the Tomorrows Warriors programme at the Royal Festival Hall that by all accounts has contributed so much to the development of this current scene. They are well connected – their 2018 album Xover features a who’s who of collaborators. Today’s performance is another welcome stylistic strand in a day of diverse goings on. NK-OK, on electronic percussion and samples, and multi instrumentalist Mr DM, on keys and guitar (joined by talk box vocalist Daniel Taylor part way through) eschew lengthy jams in favour of a scattergun mash up approach where ideas and fragments of the contemporary musical landscape come at you you thick and fast. It’s a sophisticated melange of jazz, hip hop, nu soul, pop and contemporary R&B. They finish with Pineapple, the ear worm stand out track from Xover.

Brighton Dome has really started to fill up and heat up when the time arrives for Ruby Rushton to take the stage in the middle of this hot afternoon. Not, as the name might suggest, a female bandleader, this fusion outfit is named after flutist/saxophonist Edward ‘Tenderlonius’ Cawthorne’s grandmother, one of many projects currently on the go involving this industrious musician and 22a records boss. They play a tune evoked by “the feeling of learning to drive and the freedom that comes with it”, followed by Elephant & Castle, an uptempo Latin jam from their Trudi’s Songbook Vol 1 album. Wearing their influences firmly on their sleeve, they finish with a reverential take on Herbie Hancock’s Butterfly, during which Cawthorne switches to soprano sax for some incendiary blowing set against Nick Walters’ trumpet playing, which is impressive throughout.

Cassie Kinoshi’s ten piece Seed Ensemble are nothing short of a revelation. Exploring different territory to all the other bands that take the stage today the Nérija alto player’s carefully composed pieces approach the grandeur of Kamasi Washington and have considerable gravitas. She has a couple of Nérija players in tow – the abundantly talented Shirley Tetteh on guitar, and trumpeter Sheila Maurice-Grey, whose mournful plaintive tone is a distinctive part of the mix and we suited to the material. The opener The Darkies, Kinoshi tells us is about “immigration and people’s unwarranted fear of people with dark skin”, another, dedicated to the Grenfell Tower victims, starts with the band repetetively intoning the words of a poem by Harlem Rennaissance poet Langston Hughes “Tell all my mourners to mourn in red, cause there ain’t no sense in my bein’ dead.” (Kinoshi has also set another Langston Hughes poem to music – The Dream Keeper Poet Zana then takes to the stage for to add some urban vitriol to the mix for the next tune and they finish with a piece written to evoke a Samuel Delaney novel. Tenor sax player Chelsea Carmichael makes her presence felt with some strong soloing that doesn’t go unappreciated by this receptive crowd.

Yussef Dayes is another central protagonist in this scene and perhaps not surprisingly has the honour of closing the proceedings. All eyes are on this explosive Billy Cobham tutored drummer since the the split of Yussef Kamaal who imploded shortly after unleashing Black Focus, seemingly with the world at their feet. He isn’t the type of musician to inconspicuously lay down a groove in the background, it doesn’t seem to be in his nature, and correspondingly the drum risers are pushed to the front of the stage for this final half hour. Well, he’s the band leader ain’t he? Musicians playing with him have the problem of finding enough fireworks to get a look in but Mansur Brown on chorus drenched eight string guitar (who also played in the the slightly different trio at The Great Escape) has what it takes and does let rip with progressively more rocky soloing. It doesn’t always hang together. It is mostly, or all, improvised – it isn’t clear if any of the beats or riffs have been worked out beforehand, but Dayes’ playing is as loud and intense as ever, and as well as the fusion and funk rhythms you can always hear the influence of drum and bass, broken beats and other electronic patterns as he wrestles with his kit. Even bass drum, hi hat and snare grooves bring whoops from the crowd, let alone solos. It’ll be interesting to see what he lays
down in a studio next, there definitely isn’t any shortage of ideas.