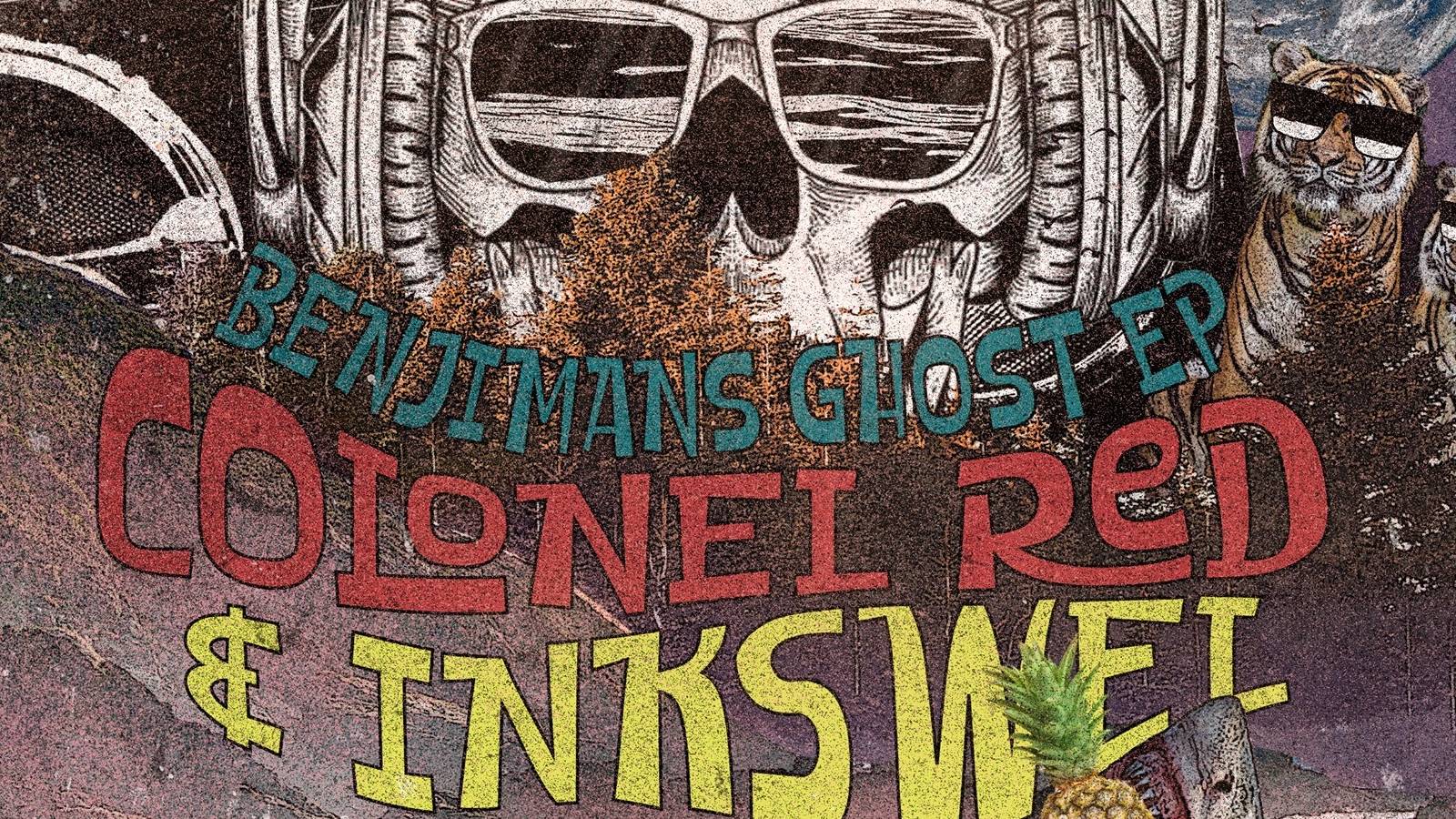 Never leaning on the notion of a mould or convention, Colonel Red Is a phenomenon in the underground soul circuit, blending the segways between Rnb, Broken Beat, Hip Hop and House music- a vocal that is strident in all things forward thinking. Previously as a vibration labelled Milez Benjamin, these sounds ring out as cosmic echos across the galaxy. Musical ghosts exorcised to modern soundscapes and captured in new future soul frame work from young beat wizard Inkswel. Re imagined for a world in touch with these outerworldly spirit songs. Benjimans ghost is a reincarnation painted in spirit funk. Inkswel takes a forward thinking approach to these ideas, letting the energies guide into frequencies that are loud but not harsh, soulful yet not soft, head nodding but not thrashing. With additional bass leanings from Chris Bass and horns from Sloth, volume 1 is well rounded and complete but leaves the listener ready for further adventures in outer world soul from the combination of Coloned Red & Inkswel.

Following the release of this excellent record, 1BTN caught up with co-producer, Jules Habib AKA Inkswel.

Hey, Jules. How’s lockdown life been in Adelaide?
Lockdown here initially mirrored the worldwide situation but fortunately being so geographically isolated has worked in Adelaide’s favour to the point that most normality has returned, our borders are still closed as the neighbouring state is still having a large spike. Life has slowed down I guess for everyone worldwide, but there is beauty in this disconnection and I’ve used that to work, rebuild , repair and re love.

You have a rich back catalogue going back to the early 2000s and you have featured releases on the likes of Firecracker, WOLF Music, BBE & Lumberjacks In Hell, how did you forge the links with so many established European labels?
I lived overseas from around 2007 to 2017 on and off in cities such as London, Amsterdam and Berlin. I guess being active in these flourishing music capitals aided me in becoming more involved in the worldwide scene as opposed to just the local thing back home

How does your style fit in back home and do you see a distinct difference in listener engagement between there and elsewhere?
Funnily enough around 2007 when I left what I was doing or at least Pursuing wasn’t a thing in my hometown, so I looked to the cities that where putting out the records I loved at the time and I guess then it was early broken beat as it bridged the gap between hip hop and dance music for me. I feel back then Australia wasn’t at the cutting edge like it is now.

The focus on the Australian scene has been intensified in recent years, especially in Melbourne and with so many great acts emerging. I’m sure there has always been a lively scene bubbling away but it’s really caught a wave and deservedly so, how has that been for you personally?
I kinda skipped over that, being in a worldly mindset what I do has always been international, i try and have a broader vision than just scenes, “it ain’t where your from it’s where you at” so to speak

What effect do you feel this new International focus has had on the scene in Australia overall?
The internet changed the game and continues to do so, we are all connected and I guess the accessibility to cheap travel (up until covid) also helped!

So, you have just dropped a cracking new album with Colonel Red. Tell us a little about that?
I originally worked with reds on my 2016 album on BBE and we have stayed friends since, I loved his work for years so to was only natural we talked about doing a project and I guess lock down enabled us to finish it! I’m very proud of this futuristic space age music, it’s really soul for the future in my eyes.

Is this a Bandcamp release only, or is there wax to follow?
It’s worldwide digital release via my new label Inner Tribe which is distributed by Alpha Pup in LA

Is your business model now as an owner, operator enabling you to manage the whole process yourself through the likes of Bandcamp, or are you still looking to work with record labels?
To an extent I’m taking my power back, I love working with and supporting friends and their labels and will continue to do so, but I also want to have full creative vision over what I’m doing. I’ve also worked a lot to help others connect with labels and networking over the years with little thanks, so I figure I may as well help people on my own terms. Most of my endeavours are also with my best friend, my business partner & wife, Charli, so this label will also have a broader perspective incorporating our art, fashion and activism. I hear so much amazing music and know so many talented people and it’s all so subjective, at least I can give something back to those who put good energy into the universe this way. I have the first 10 releases already pencilled in and I’m making the vision very consistent and true to my tastes which feels great. Outside of that I’m a man of many hats and I have a lot of other music I make that doesn’t fit the vision I have for the label, so I’ll continue to work with my friends like Sonar Kollektiv, Atjazz recordings , Coopr8 and the up and coming guys of course! I’m also doing A LOT of remixes these days and a lot of beats for rappers for more hip hop based projects.

Any plans to come over to the UK when all this blows over?
Yes! Itching to travel and connect with people over the divine energy of music!