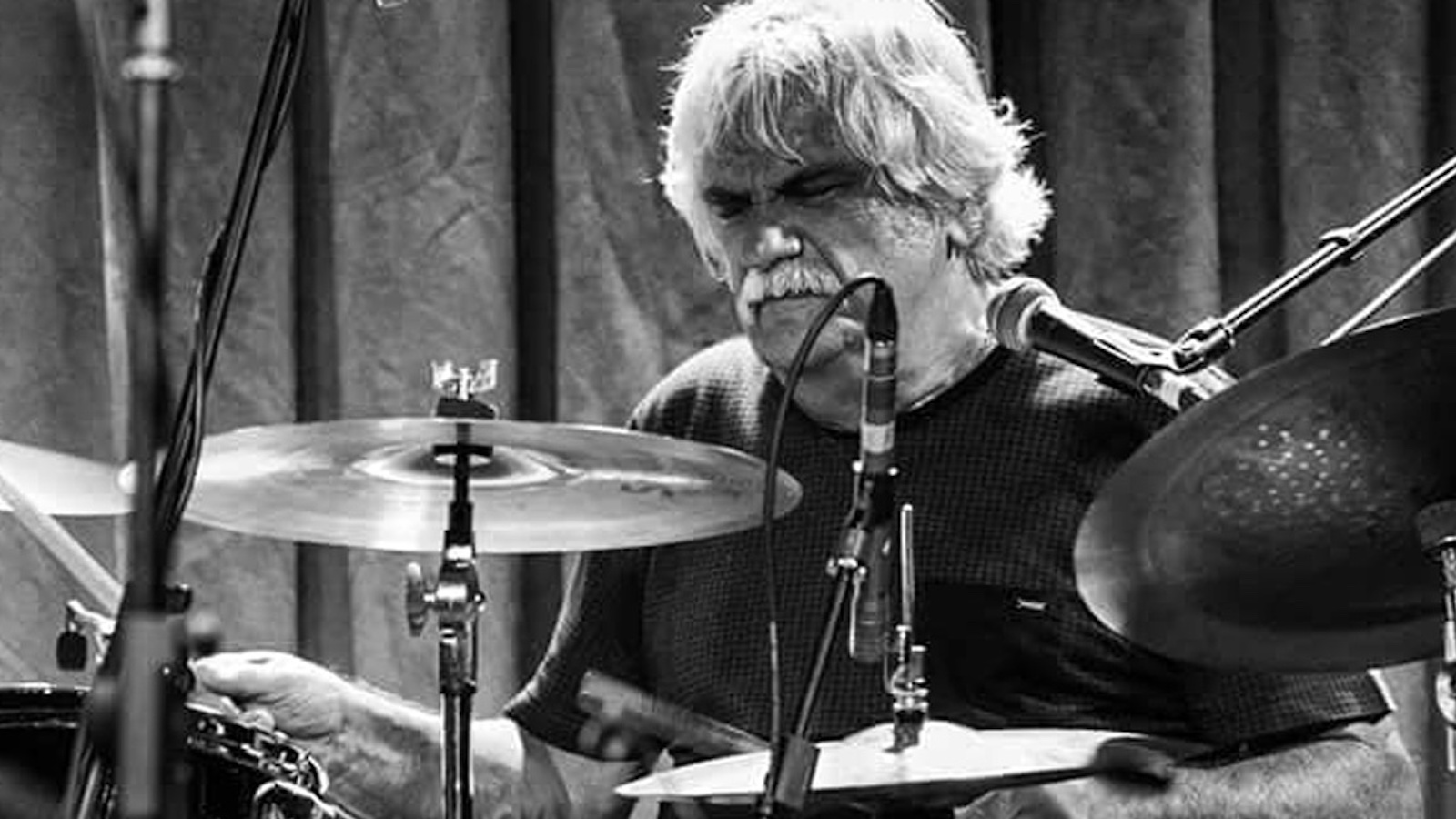 Ivan, how you doing?

Fine, thank you my friend.

Where are you in the World right now?

I am in my house in Saquarema, which is about 2 hours from Rio de Janeiro.

I understand that you have been on tour recently with Azymuth, did that you take you out of Brazil?

We know you first as the drummer with and one third of the legendary group, Azymuth. Tell us how you guys met.

We met in 1968 and in a nightclub in Rio. I played with a Brazilian rock band called The Youngsters. Bertrami played in another band, in a trio. Alex then played in another band on the other side. This place was so big. Lots of different stages, I would finish and then watch the other bands and so on. We all drank beer outside after the shows and Bertrami said ‘Let’s all go back to my house and play something’ there we started. There was no Azymuth then we were the trio known as, Grupo Seleção. We started playing nightclubs and were working for a long time in studios, then one day Marcos Valle – an old friend – said that he had a gig for us, which we did. We then started working on ain album in the studio and one of these tunes was called, Azymuth, which was a Marcos Valle song. We released the album and then after that people would say ‘Oh, Azymuth are back!’ It was like a sound, you know? They loved that song. So, we asked Marcos Valle if we could use the name and he agreed. So, in this time I think 1972-73 we changed the name to Azymuth.

Brilliant! So, you have Marcos Valle to thank for the name. That’s a great story.

Yes, Marcos is a great friend. We recorded for a long time with him.

You said there that you started in a rock band, so how did you move into samba and jazz-funk, which defined you as a group?

So, jazz and rock n roll were your influences, so I guess you were listening to a lot of American music?

My first record was Count Basie but I think my first real albums were from the great drummers, Buddy Rich and Max Roach. Art Blakey too, this guy! I listen to this guy too much! I started to hear Jazz-Funk in the 70’s. I loved a lot of drummers, English drummers, American drummers, and Brazilian drummers too. These guys give me a lot of inspiration to come to drum. In fact, my first instrument is guitars, acoustic guitar. Sometimes I put the Hammond in you know? But my real instrument is the drum.

You have played with all the Brazilian greats, Milton Nasciemonto, Jorge Ben, Gal Costa, amongst many others. Have you always been busy as a player for other artists when not recording with Azymuth, or working on your solo material.

Aah, yes. I played with lots of composers and artists. Gal Costa is fantastic, I played for 2 years with her. Roberto Carlos too I played 2 years. Jorge Ben is a good friend. A lot of artists and I stayed in the studio for a long time, 30 years.

I look back at the back catalogue of your work, Ivan, it’s an incredible wealth of music. This has been your career for 40 years plus right? You never had to do anything else.

Yeh, this is fantastic. I learned about compass, about time, I think working in the studio is the biggest teacher in music. You have to do right.

I’m familiar with a lot of these albums but I need to dig further, for sure. You released a wonderful album with Madlib under the name ‘Jackson Conti’, a great meeting of musical minds, where did that collaboration come about?

This is a fantastic album, I met Madlib in about 2004-2005. There was a performance with five drummers and 5 Dj’s and Madlib was there. Actually, one year before he came into my house and said ‘I’m a big fan of your music’ and he showed me a compilation he did of, Azymuth. We then did the event. We were friends. He then said we should do an album, I said ‘Ok, what do you want to do?’ He said to do anything i want and then he would do some overdubs, or whatever. I got to the studio and drum and do some beats. So, there comes Jackson Conti and our album ‘Sujinho’. He’s a great musician, exploration. It’s a great team. He’s a good friend.

So, moving forwards a little bit, the link up with Joe Davis and Far Out Recordings happened.

Yes, we played at this big house in England. Joe Davis was there and he came up and said he loved what we do and wanted us to release on his label. We started 95/94 I think. He said his label isn’t a big label but he wanted to record us. He said he would come to Rio and we agreed. He knows Brazilian sounds.

You have also released your solo material through Far Out Recordings and have been remixed by the likes of IG Culture and Tenderlonious, amongst many others. It’s great to have your music reworked by different producers, who are well respected in their own fields. Do you ever get to meet these guys?

In the beginning I remember, Roni Size, he said he wanted to mix a compilation of Azymuth. I said ‘Wow! What is this?’ Fantastic. I know Tenderlonious is a new guy. I like all this work but I didn’t get to meet them personally, no.

It’s taken your music to a different audience and in a new different direction, how do you feel about these guys and the remixes they do for you?

Aah, I love it! It’s fantastic. Sometimes I wonder what kind of music this is, I don’t recognise. I know they change the compass and they change the time, changes the play. So, these guys are very important to us and to other musicians, I know that.

So, the new album then Ivan. Wow! What a piece of work. It’s been produced by, Daniel Maunick, who also produces as Dokta Venom. A lot of people may not realise that he’s also the son of Bluey from Incognito.

Aha, yeh. He’s a great producer. Joe comes to my house and I recorded 6 or 7 songs in my mini studio here. Daniel then comes here and brings his equipment and we recorded another 4 songs. I have to say thanks to my son too, Thiago, he’s a musician too and he helped me on several songs. All of these guys are important to this album.

Are there any plans for you to tour out of Brazil with Azymuth, or on your own?

Aha, I’m waiting on Joe Davis and the booking agencies. I’m thinking ‘What’s happening man?!’ *laughs* I think I would like to tour with Azymuth and tour the album ‘Poison Fruit’. Thiago of course will come with me and hopefully we should be hearing in the next few weeks.

What are you going to do, Ivan? You keep going until you can’t go anymore? There must be a stash of unreleased music you have in your library!

*laughs* Yeh! I have a lot of tunes and I’ve recorded a lot of new tunes here too. I’m very excited for this album. I have a lot of people calling me and telling me they love the album. I love this album and I’m thankful to everybody and to you and to the people who support it.

If you keep making incredible music my friend, we can enjoy it and share it, it’s a mutually beneficial arrangement! Before you go, where did you get your nickname ‘Mamao’ from?

Mamao came to me being very young and i was at school. I stayed there and only at the end of the week I would go home. I played football a lot and my school had a very good team. I went to play and the director told me I couldn’t play, he said I had bad markings from school, I didn’t! *laughs* I told him I loved music and I was being good. He said ok, you can play. I broke all his papaya trees! He came running out, ‘No! No! My mamoeiro trees!’ There, Mamao I was called by my friends and still to this day. It’s a school story. *laughs*

I like that. Lovely story. Ivan, I just want to thank you. You’re a legend of the music world and not just the Brazilian music world. Your contribution has been and remains to be pretty incredible. Please keep doing what you are doing and inspiring the next generation. Thank you so much for your time it’s been a real privilege.

Muito obrigado! Thank you very much my friend. It’s a pleasure. Bye.