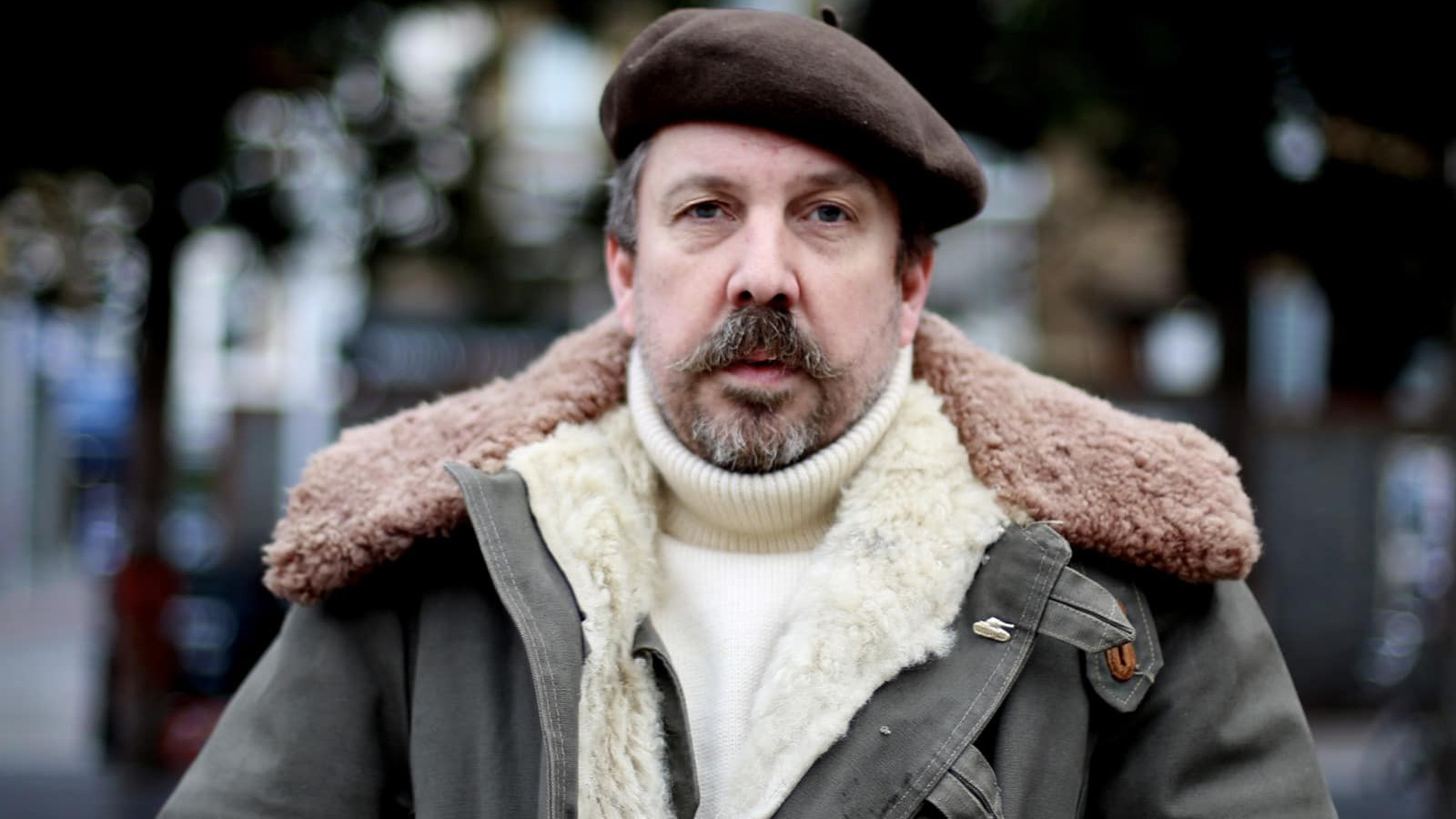 Legend, pioneer and musical hero to so many of us at 1BTN, Andrew Weatherall passed away on February 17, 2020.

Whether you know him from his work with Primal Scream on their Screamadelica album or from Bocca Juniors or The Sabres of Paradise; as Lord Sabre, The Outsider or The Chairman; it doesn’t matter if you danced to him at Boys Own parties in the late 80s, at Sabresonic in the 90s or at Carcassonne or A Love From Outer Space, one thing is for sure, of all of the talents that emerged from the UK acid house scene, Andrew’s legacy is unsurpassed.

Andrew was born in Slough in 1963 and began collecting records at “12 or 13 years old”.  He ended up DJing on the acid house scene when, in his words, promoters would “call that bloke with the weird records to play at six o’clock in the morning…and going down like the proverbial turd in the salad”.  In response he incorporated more house and disco records into his set and was soon DJing at Shoom and Spectrum.

Writing as The Outsider in the seminal Boys Own fanzine Andrew laid his tastes out for all to read.  His first top five for the magazine eschewed the dancefloor: King Chicago by (The) Bible led the way with Everything But The Girl, The Pogues, The Rolling Stones and REM making up the chart.  In 1990, Boys Own expanded to become a record label. First up was a timeless Weatherall remix of Big Hard Excellent Fish’s Imperfect list, followed by a collaboration between Weatherall, Terry Farley, Pete Heller, Hugo Nicholson and Anna Haigh, as Bocca Juniors.  Their singles Raise and Substance were intended, said the band, to be ‘Balearic anthems’.  As it happened, they were, and so were Weatherall’s remixes of St Etienne’s Only Love Can Break Your Heart and his omnipresent reinterpretation of Primal Scream’s I’m Losing More Than I’ll Ever Have, famously renamed as Loaded.

The success of the collaboration with Primal Scream led to Weatherall producing their album Screamadelica, universally accepted as one of the great albums of its generation.  From there he  went on to produce One Dove and deliver seminal remixes for My Bloody Valentine, Meat Beat Manifesto, The Happy Mondays, New Order, Galliano, Jah Wobble, Future Sound of London, Flowered Up and The Orb, cementing his reputation yet making him impossible to pigeonhole at the same time.  In 1993 he teamed up with Gary Burns and Jagz Kooner as The Sabres of Paradise. They signed to Warp Records as well as releasing on their own record label, putting out experimental and techno releases alongside their classics Wilmot and Smokebelch II.  The Sabres label, and sister Sabrettes, evolved into Emissions Audio Output and Rotters Golf Club and Andrew moved on to form Two Lone Swordsmen with Keith Tenniswood.

In recent years he ran the Moine Dubh imprint and recorded as The Asphodells with Timothy J. Fairplay and as Woodleigh Research Facility with long-time collaborator Nina Walsh.  The quality of his remixes remained as high as ever: in recent years Doves, David Holmes and Emiliana Torrini are among an extensive list of acts to have benefitted from having Weatherall at the controls.

As a DJ he cultivated his own sound – listen to any of his mixes and you’ll hear a DJ totally unlike any other.  Whether it be a mix from his nights Sabresonic, Blood Sugar, the Haywire Sessions or, most recently, the ‘drug chug’ of his A Love From Outer Space parties alongside Sean Johnston, Andrew had a habit of making special things happen: an alchemist unlike any other. Licensed mixes like 2000’s Nine O’Clock Drop are an education for any DJ.  The term DJ’s DJ is overused – in Weatherall’s case it is absolutely appropriate.

When many of his acid house contemporaries, and those that followed in their wake, trod the path towards super clubs, Weatherall remained a punk at heart.  A quote attributed to Andrew that you’ll read elsewhere over the next few days bears repeating: “It’s a lot of work, once you go up that slippery showbiz pole, and it would keep me away from what I like which is making things. I mean, I had a little look in the early nineties. I stood at the bottom of that pole and looked up and thought to myself ‘The view’s pretty good. But it’s very greasy and there are a lot of bottoms up there that I might have to brush my lips against so, maybe I’ll give it a miss.’” This punk attitude kept him in the hearts of many.  That acid house spirit kept him at the forefront of all that is progressive in music.

Andrew’s death has touched many of us today. He will always be remembered as a true pioneer.  He is a man who changed the face of popular music and, at the same time, he was a leading light in the last true British youth movement. He was a pioneer and an inspiration to us all.