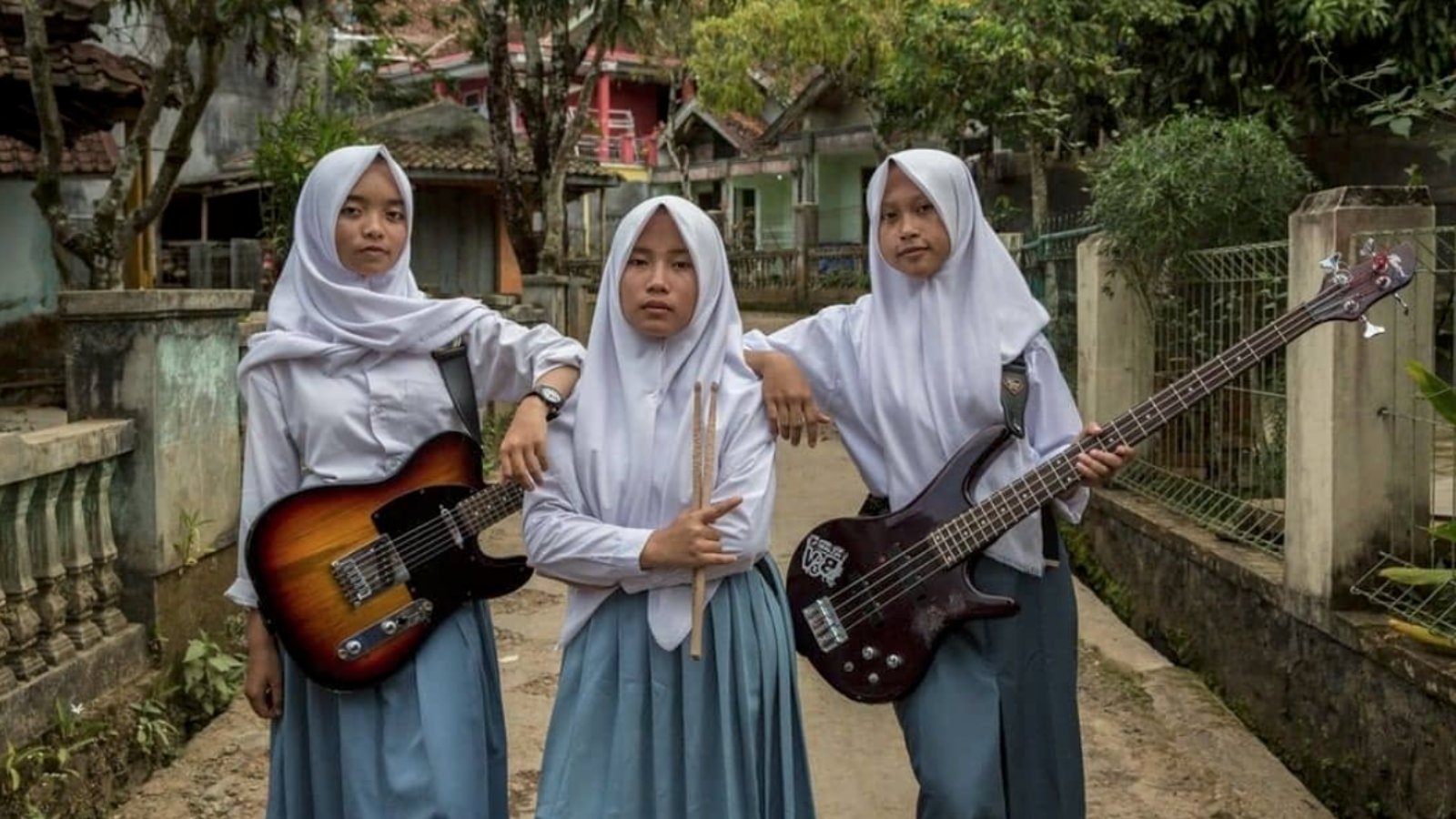 1BTN’S Jo Dressler tells the story of women making their mark in contemporary music, from Muslim metal to Filipino dancehall.

All female, Muslim metal band (now there’s a few demographics you don’t see melded together very often) Voice of Baceprot are an Indonesian teenage metal band, smashing through stereotypes as hard and fast as the riffs they execute. Their band started when they came across metal music on their teacher’s laptop. Something spoke to them, they committed to practising everyday after school, quickly gaining technique and beginning to perform locally. As you can imagine, their acceptance in society wasn’t quite as seamless as their romance with metal, they were stoned and threatened on social media, their parents forbade them to play. Social media attackers criticised them for wearing hijabs and playing metal music, saying it was Haram. But the girls, quite righteously, pursued their creative calling, observing the fact that there is no morality in metal, it is a genre and not a question of religion or blasphemy. “For us, metal is just a musical genre,” Kurnia told The Week. “We play metal music, but we don’t leave salat (daily ritual prayers); we keep wearing hijabs, as well as our other (religious) obligations.”

Indonesia has one of the largest metal scenes in South-East Asia which began in the 1990s and was associated with resisting the decades-long dictatorship of Suharto. According to ethnomusicologist Jeremy Wallach “their scene was part of the cultural ferment that contributed to the toppling of that regime.” Voice of Baceprot upholds the tradition, using their voices to speak out about issues such as climate change, religious tolerance and problems with the education system in Indonesia. A wonderful example of women owning their space, staying true to themselves and the power of their art, VoB have now performed on national television, gained acceptance from their country, and most importantly, their families. In an interview Kurnia explains “We fell in love when we first heard metal music, for us, metal is media to show our critical voices. Metal music matches with the determination in our souls.” If their story doesn’t fill you to the brim with admiration and joy, I don’t know what will.

A passionate music lover from a conservative Kazakhstan family, Nazira is responsible for integrating a newly thriving underground club scene in Almaty, Kazakhstan. Inspired by her trips to London and Glasgow, and witnessing the freedom and unity that was palpable in the club scene, she felt it necessary to bring something with a similar attitude to her community in Almaty. Her venture, ZVUK is very grass-roots, and she admits, sometimes borders on illegal. The music flushing through sound systems at her parties fits under the wide umbrella of EDM, ranging from acid, broken techno and ambient to psychedelia and D&B. Her events migrate from venue to venue, occupying all sorts of buildings from the canteen of a factory, a former strip club, to a disused world war 2 bunker. Nazira has a pointedly forthright and passionate moral behind her project, discarding her family’s wishes for her to marry and settle, and persevering with her calling “I want it so you can be a freak on the dancefloor and no one is going to look at you,” says Nazira. “If I can see someone is making anyone else uncomfortable, they will be out instantly.” A wonderful sentiment that I know well, only with spirit like this, can a grass-roots project survive. I predict that ZVUK parties will be some of the rare and preciously sought after, free flowing parties from scenes built from passion and the need to dance, rather than to make money or gain status, in years to come.

Despite being over 15,000 kilometres apart, Manila has a booming Jamaican Dancehall scene, and it’s dominated by the women who dance in battles against one another. Dancehall has had a place in the clubs of Manila since 1994, but only has the scene kicked off with serious dance battles in the past two years, mainly dominated by a collective called Dancehall Manila, founded by Kristal Bermudo and Yen Caballero, who are the queens of their world. Reggae and any genres related to, were played in clubs in Manila, but it wasn’t until 2010 that dancehall took off. As the stories of many sub-cultures or music scenes go, it began with one regular session, in an open air space called B-side, where dancehall and anything reggae related  – roots, ska, dub, – was played. A huge advocate of and generator of Irie Sundays was half-Japanese, half-Filipina dancer Phattymaria, who started dancing at clubs in Japan and won Japan’s Dancehall Queen title in 2007 in Jamaica. She says of the dancehall scene in Japan in the 90s, “Dancehall was still underground then, so only unique people were going to the parties. It was so liberal and free”. Phattymaria brought that fun, liberal attitude to B-side and Irie Sundays continues today. The style of dance has derived from expressions of hip hop and R&B, due to MTV having a large audience in Manila. Dancehall continues to seep into the nightlife of Manila, drawing the youth in with it, and the fledgling scene continues to expand and cultivate itself, gaining recognition right from the source, a sure and satisfying nod to the legitimacy and finesse of the music and dancing on the scene “To see dancehall culture travel this far is such a great thing,” says Craig Black Eagle, a Jamaican dancer, “You all should big up yourselves.”

Laura Lewis-Paul is the brain and woman-power behind Saffron; a label and artist development platform based in Bristol, as well as the mentor manager for shesaid.so and a founder of Bristol Women in Music. She dedicates her career to carving a space for women in the music industry, particularly in those stereotypically male roles like sound engineering and production. She creates ample educational opportunities for women that challenge the music tech world, aiming to create a more inclusive and diverse future. Knowing how hard it could be to get work in the music industry as a woman, Laura wanted to lend her experiential knowledge to others, commenting “being a black woman, you know that you can often have to work ten times harder to prove yourself when you’re a minority within a certain demographic.” The way she implements this is by running sound engineering, music production and mixing courses for DJs. “The DJing is amazing, we’ve got over two hundred women on the waiting list. Bristol’s DJ industry has really changed. On all the posters now there’s at least one DJ who has taken part in our Mix Nights course.” Seeing such a success in her work in Bristol, Saffron have now been funded by the council and plan to take their courses further afield, to other UK cities as well as overseas, trialling in Argentina and Russia. Find out more about Saffron here. Head over to Saffron Records Bandcamp to purchase releases on the label.

GRRRL are a seven-piece all-female band brought together by the global charity In Place of War, originating from seven different countries around the world. The purpose of the collaboration is to communicate their stories, unifying different diasporas, women and people of all different backgrounds, through the power of music. Everyone involved with the production and performance of GRRRL are female. The band consists of; Mercury prize winning rapper; Speech Debelle, Zimbabwean queen of rap; AWA (African Women Arise), Lei Di Dai; Brazilian dancehall singer, Wiyaala; Ghanaian singer-songwriter, Nono Nkoane; Nu-Jazz and folk singer from Cape Town, Sohini Alam; British-Bangladeshi singer, MABE; DJ and percussionist from Venezuela, AFRODEUTSCHE; British-born Ghanaian electronic artist, all under the musical direction of Brazilian DJ Laima Leyton; one half of Mixhell and member of Soulwax. With such an impressive line-up of talent, the band express a huge multiplicity of musical quality in their performance, fluctuating in genre between techno, electronica, dancehall, reggae to hip hop and soul, each bringing a personal message and story to the collective. Watching them perform evoked many different emotions for me personally, from sorrow to grief and from elation to empowerment. These ladies are a force to be reckoned with, they tell their own stories from the past and are living and demonstrating a new one; proving that women can stand alone in the music industry and be just as powerful, if not more, than when backed by male counterparts. The fact that they are an all-female collective, from the ground up, really challenges and breaks down the stereotypes that music production and direction is a male role. I think this stance is as important a message as any of the issues they sing about. Their aim is to unite, to comfort and to motivate their audience. Achieving this in more ways than one, I think GRRRL are undertaking a crucial job, imperative in the venture of this wave of feminism. Using their artform to it’s greatest power, and by uniting musicians from seven different countries, GRRRL are able to identify with and bring together a much wider and more diverse audience. If you do get the chance to see them perform, make sure you take it, with beats as potent as their stories, they unquestionably achieve their aims of unifying, comforting and motivating their audiences.