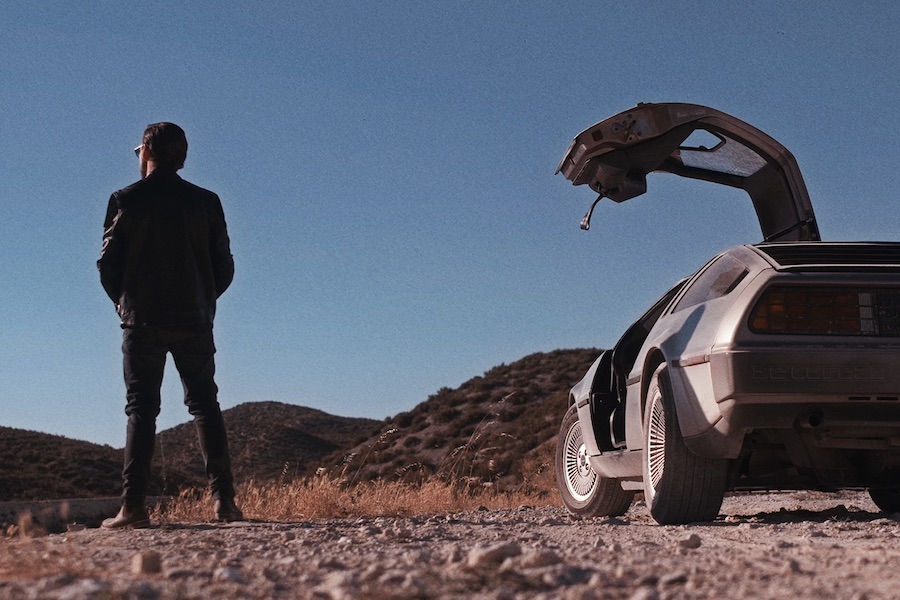 The last ten years has seen an explosion of music documentaries – bigger budget docs like Amy, Chasing the Train or 20 Feet From Stardom, but also a whole slew of indie documentaries about underground bands, more or less obscure. The democratisation of the film production process, the rise of social media as a promotional tool and the advent of crowdfunding have ushered in a golden era for music geek film watchers. 1BTN asked Colm Forde, founder of Doc’n’Roll film festival, to tell us about his 5 favourite documentaries.

The Rise of the Synths is a really interesting doc. Watching this film I became aware of this crazy oddball left of field sub-genre of synth music, Synthwave, which pays homage to 1980s blockbuster soundtracks. These would have been soundtracks by John Carpenter, who (because of a lack of finance) thought, fuck it I’ll soundtrack my own films using Moogs and analogue synths, and of course Tangerine Dream. The early to mid eighties became really big for Tangerine Dream and loads of directors went down the synth soundtracking route because of it being eerie and otherworldly.

This film is about two generations beyond that, looking back at that as a major movement in pop culture and wanting to pay homage to it with a bit of tongue in cheek, pining for a decade that they’d never lived – because most of the producers are in their 20s or early 30s, bedroom producers who, through MySpace particularly, hooked up with each other 10 or 11 years ago. All of that 80s kitsch came with MySpace – bad design and garish colours, that really suited their mood.

Its made by a Spanish filmmaker and it’s a very well put together film across six or seven different countries. It’s a retro future, back to the future kind of thing. It’s a great film if you’re just a fan of music or like hearing about fanatical fans of any genre. The interviewees break down the middle – 50% of the producers saying that they are into this music as an homage to particular era, the other 50% saying, no, this is really serious music we’re making. There’s an interplay between these two different sides – one lot who have their tongue in their cheek and are having a bit of fun and the other who are really serious.

The Rise of the Synths is showing as part of Doc’n’Roll film festival in Brighton on 28th March 2020.

Doc’n’Roll film festival had the world premiere of this at the ICA about three years ago. I wasn’t that aware of Bad Brains, I knew the name, I’d heard one or two tunes. This film is about HR, the frontman, and the real powerhouse of the band. I found it really heartening story, the filmmaker, or a friend of his, literally stumbling across HR on the street late 90s or early 2000s when he was living between shelters and essentially homeless. Because of his mental health issues and because of the lack of healthcare in America it was like the Breaking Bad thing – there are so many elements of life that depend on an easily accessible healthcare system and this is just one of those instances of someone falling through the cracks because he wasn’t getting the care he needed. Then he fell out with the band members and he ends up down and out on the streets for years.

The filmmaker tagged along with him for six or seven years. I’m happy to say he’s back on his feet now. I actually saw him in another documentary that we’ll be showing next year called Punk The Capital about DC punk and he’s in it and he looks amazing, really well, really lucid, really on it, because in Finding Joseph I he’s a bit out of his head on medication, not that sharp. It’s really heartening to see him now – this film was completed about four years ago.

It’s an interesting film because you can see how he was this really rowdy early 20s in your face DIY punk head, raging against everything, and now he’s a man of the streets with a prophetic view of life with his staff, kinda like a shaman. He obviously had that shamanic stance when he was performing back in the day. You see him 30 years later and how that fits the bill now he’s older. It’s hard to put my finger on why it’s so great, but just as a fan of music it’s a really interesting story.

You can rent Finding Joseph I from Doc’n’Roll TV here.

MC5 – A True Testimonial (5) from Orchide.Detroit on Vimeo.

It’s a crime that this isn’t available anywhere. It got pulled from distribution because Wayne Kramer from the band sued the filmmakers, he thought there was some money behind it and he should get his cut. He was a bit put out about it so he fucked it all up, and to cut a long story short it got caught up in litigation. The filmmakers had to pay the legal fees and they never got round to re-releasing the film properly – it got released and then pulled. But it’s an amazing story, a really well made documentary that I stumbled across myself in Camden Market, a bootleg copy that the guy was selling for six quid.

Great film to watch if you can get your hands on it – people started bootlegging it after the initial DVD release in 2003 that got shut down. They totally deserve this film because loads of people don’t know anything about how influential and revolutionary they were and what they were trying to do. They were insane, they set up the White Panthers in homage to the Black Panthers. They had the FBI all over them because of how radical they were, their playing and their gigs, they were seen as a major threat, but because of the drugs and the infighting that all dissipated. It’s funny to see how raw and in your face it was. How challenging they were, for two or three years, to the status quo and to conservative America and Detroit. A really great film.

I knew nothing about L7 until we started screening this film two or three years ago. It’s definitely a band that went under my radar when Nirvana was happening, that scene around then. The film itself is a beautiful compilation of their own footage and usually that makes the best films. It’s personal footage put together by a great, passionate editor. In documentary making the editor is even more important than the director for me – it’s 60% editor 40% director – because they have to hone the whole thing and be brutal about throwing bits out and making a short, sweet film. A lot of the time these films come out at 2 hours and they’re way too long. The Melvins documentary was a disaster in terms of not having a ruthless editor. You’ve got to cut that extra 20 mins out and put it in the extra material DVD for the fans, cause you’re putting off a potential audience.

They had all this Hi8 stuff from their early 90s tour and it’s a really great film about these kick ass women doing it their own way and then it all dissipating through bad deals and bad business, then the resurrection of them back on the road the last 4 years at the tail end of the film. It’s a nice little ending. They’ve gone through their lives, they’ve come back together after falling out with each other 20 years later. It’s great.

You can rent Pretend We’re Dead from Doc’n’Roll TV here.

For me, being a fan of the mod scene, I was aware of Dr Feelgood a little bit, a classic r’n’b British pub band – it was harmonicas that they were trying to get away from, they just couldn’t get gigs in bigger places! I found it a really interesting beautifully made film – going down to Canvey Island where they’re from, that industrial landscape used really interestingly by director Julien Temple, projecting their old footage onto oil containers. It’s a beautifully made film with Wilko Johnson in the foreground reminiscing, telling about how they used to going into the gigs in London like a gang, a bunch of bank raiders heading into the city, and then busting out of there before all the fights started after the gigs.

It has great momentum within the film and intercut with 50s b-movies, the cockney thing or the east London thing. You can see Wilko Johnson’s enthusiasm within the film, that he’s finally getting some limelight, long overdue for such a character. I think it’s a really inventive film, the way it’s edited and put together. Again, it’s not about a big band , they’re pretty left field in the UK and not well regarded outside of a small circle of people. They were completely eclipsed by punk, it was bad timing for them. That’s one I’d watch a couple of times.

Doc’n’Roll film festival runs in Brighton between 25-29 March and around the country in several other cities including Liverpool, Nottingham and Sheffield: docnrollestival.com